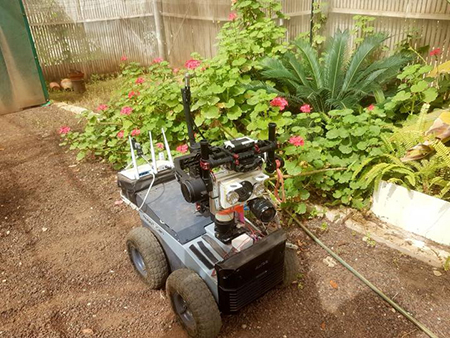 Bats use echolocation to map environments, navigating them by simultaneously emitting sound and extracting information from the echoes reflected by surrounding objects. And while theoretical frameworks have been proposed to explain how bats routinely solve one of robotics’ most challenging problems, few attempts have been made to build an actual robot that mimics their abilities.

But at Tel Aviv University, Itamar Eliakim and his colleagues developed a robot that uses a biological bat-like approach, emitting sound and analyzing the returning echoes to generate a map of space. In place of a mouth, Robat uses an ultrasonic speaker that produces frequency-modulated (FM) chirps at a rate typically used by bats. Two ultrasonic microphones are used in place of ears.

The simplicity of the design was intentional. Bats emit relatively few sonar emissions towards an object, relying on just two receivers — their ears — to extract spatial information from a wide bio-sonar beam. Unlike the narrow-band signals typically used in robotic applications, the wide-band signals used by the flying mammals provide ample spatial information, enabling the localization of multiple reflectors within a single beam.

Robat is able to delineate the borders of objects it encounters, classifying them with an artificial neural network to create a rich, accurate map of its environment. As described in a recently-published study, Robat was able to use its classification abilities to determine whether a “dead end it encountered was a wall it needed to avoid or a plant through which it could pass.

"To our best knowledge, our Robat is the first fully autonomous bat-like biologically plausible robot that moves through a novel environment while mapping it solely based on echo information — delineating the borders of objects and the free paths between them and recognizing their type," said Eliakim. "We show the great potential of using sound for future robotic applications."