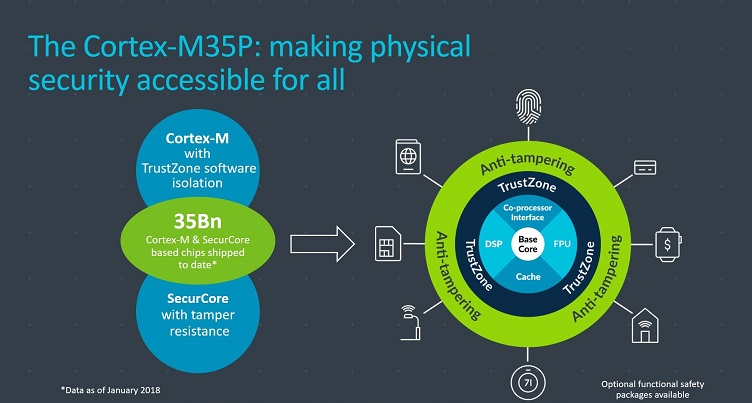 ARM has introduced a new Cortex-M35P processor that combines anti-tampering technology and software isolation in order to beef up security in emerging internet of things (IoT) applications.

With the market for IoT set to explode in the coming years as the proliferation of industrial applications and the smart home become ubiquitous in the electronics industry, attacks on these devices are likely to increase substantially. ARM has enhanced the security IP in its processors against physical and close proximity side-channel attacks including power and electromagnetic analysis.

These types of attacks, including tamper and fault-injection base-level security attacks and non-invasive side-channel attacks, could compromise an entire system. ARM believes this type of security will eventually be required for payment and identity applications and be integrated into smart lighting, connected door locks, smart meters and automotive applications.

The ARM Cortex-M is the first processor with designed-in tamper resistance as well as its new TrustZone technology for software isolation as well as ARM’s CryptoCell-312P and CrypoIsland-300P security IP.

Since the 2016 attacks on major parts of the internet — including PayPal, Twitter, Amazon, Netflix and more — that were the result of hacked smart home devices, consumers have been concerned that the devices that offer home automation may come back to hurt them in the form of a cyberattack. Recently, a new survey reported that about two-thirds of consumers were concerned about the lack of security from hackers in their smart devices.