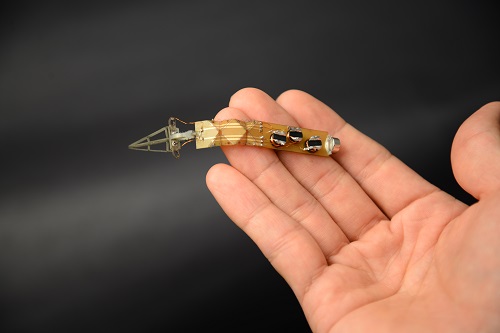 A magnetic folding robot arm that can grasp and bend using a wireless electromagnetic field. Source: Wyss Institute Origami robots are an emerging type of robot design that can change shape to form different objects, such as the recent Mori modular robot.

However, many of these designs include onboard batteries or a wired connection to a power source. This makes the robots bulky and clunky compared to the traditional Japanese method of turning a sheet of paper into a complex 3-D shape.

Now, a team of researchers from Wyss Institute for Biologically Inspired Engineering and the John A. Paulson School of Engineering and Applied Sciences (SEAS) at Harvard University has created a battery-free folding robot that is capable of complex, repeatable movements powered and controlled through a wireless magnetic field.

"Like origami, one of the main points of our design is simplicity," says Je-sung Koh, Ph.D., a postdoctoral fellow at the Wyss Institute. "This system requires only basic, passive electronic components on the robot to deliver an electric current—the structure of the robot itself takes care of the rest."

The robots are flat, thin plastic tetrahedrons that have three outer triangles hinged to a central triangle and a small circuit on the central triangle. Coils made of a metal called shape-memory alloy (SMA) are attached to the hinges. The SMA can return to its original shape after deformation after it is heated to a certain temperature.

To power the robot, wireless electromagnetic power transmission is used, the same technology that can be found inside wireless charging pads that recharge the batteries in cell phones and other small electronics. An external coil with its own power source generates a magnetic field, which induces a current in the circuits in the robot, heating the coils and leading to the folding process. A resonator is built into each coil unit and tuned to respond only to a very specific electromagnetic frequency. Changing the frequency of the external magnetic field allows each SMA coil to contract independently from the others, researchers say.

"Not only are our robots' folding motions repeatable, we can control when and where they happen, which enables more complex movements," says Mustafa Boyvat, a postdoctoral fellow at the Wyss Institute and SEAS.

Wyss researchers believe this type of foldable robot could be used for numerous applications such as an uncomfortable endoscope where instead of having something shoved down a patient’s throat, they could swallow a micro-robot that could move around the perform simple tasks such as holding tissue or filming. A larger robot could be used to operate multiple smart objects inside a home.

To show how the technology could accommodate a variety of circuit designs, the team built a variety of robots from a quarter-sized flat tetrahedral robot, a folding robot arm that can grasp, and a hand-sized ship robot made of folded paper.

"There is still room for miniaturization. We don't think we went to the limit of how small these can be, and we're excited to further develop our designs for biomedical applications," Boyvat says.