SoCs for Military and Defense Applications 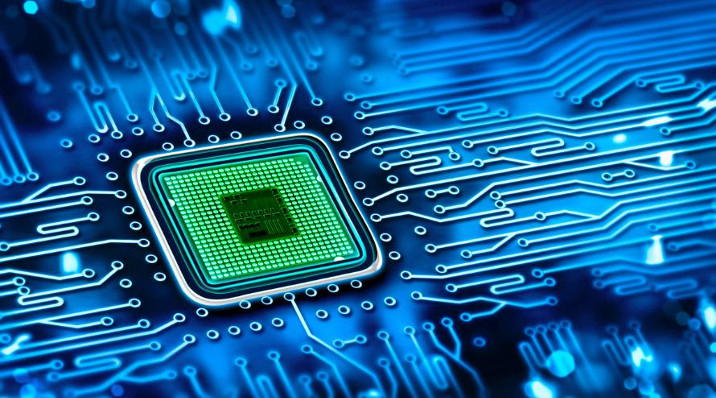 The demands placed on electronics in military and defense applications are rigorous. Operating in harsh conditions, military personnel require operational flexibility in their equipment, leading to design requirements such as low size, weight and power consumption (SWaP). Devices must also be capable of withstanding severe environmental conditions such as extreme vibration, shock and temperature. Computing power is crucial for a wide array of military equipment today, from radar systems and avionics to mobile radios and handheld sensors. As a result, systems engineers look for electronic components that minimize SWaP, while maximizing performance. To meet this demand, board/module designers are continually advancing state-of-the-art system-on-chip (SoC) technology.

What is a SoC?

The relentless miniaturization of transistors, the basic building blocks of integrated circuits has allowed designers to fit the functions of multiple devices on a single chip. A computer board that once required separate chips for processing, memory, peripherals and communications can now be designed with a single SoC that accomplishes all of these tasks.

SoCs are discrete silicon chips that contain one or more processor cores, such as microprocessors (MPUs) or digital signal processors (DSPs), in addition to memory, peripheral functions, and other specialized blocks. SoCs combine custom hardware and software to perform a computing task with the highest performance in the smallest physical form factor possible. Layout is simplified with fewer interconnects between multiple chips enabling smaller form factor realization and less power consumption.

There are many types of customized chips on the market. The distinction between SoCs and other custom chips comes down to complexity. Application-specific integrated circuits (ASICs) are similar to SoCs in that they are custom made chips designed for a specific purpose in a single system. They have high performance, but can be time-consuming and costly to design. An ASIC with a processor is considered to be an SoC.

Application-specific standard parts (ASSPs) are essentially ASICs that are more general purpose – designed for a specific application, but targeted to sell to multiple customers in a wider market.

Then there are field-programmable gate arrays (FPGAs), which have an array of programmable blocks linked by programmable interconnects and are capable of implementing digital functions and algorithms as desired, including parallel processing of data.

SoC FPGAs represent, perhaps, the current pinnacle of these customized chips. They are advanced devices with the complexity and multifunctional capability of SoCs and the customizability of FPGAs. 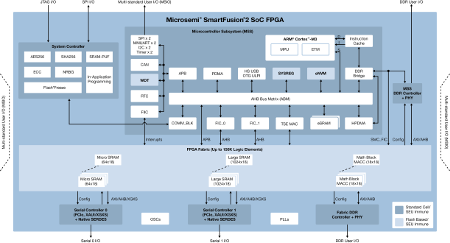 One example is Microsemi’s military grade SmartFusion®2 SoC FPGAs, which combine programmable analog circuitry, FPGA fabric, and an ARM Cortex-M3 processor. They offer up to 150K logic elements (LEs) with a 166 MHz ARM Cortex-M3 processor, Embedded Trace Macrocell (ETM) and instruction cache with on-chip eSRAM and eNVM and a complete microcontroller subsystem with extensive peripherals, including CAN, TSE, and USB. Security features include hardening against Differential Power Analysis (DPA), and support for 256-bit Advanced Encryption Standard (AES-256), 256-bit Secure Hashing Algorithm (SHA-256), and on-demand non-volatile memory (NVM) data integrity checks. Their eSRAMs and DDR bridges are protected from or tolerant of single event upsets (SEUs – which we will discuss later in the article).

SmartFusion®2 SoC FPGAs are used in the communications, automotive, and medical markets and the military-grade version is aimed at the defense industry. Applications include video/image processing, system management, secure connectivity, bridging functions, and input/output (I/O) expansion and conversion.

Soldiers and unmanned aerial vehicles (UAVs) require light loads that fit in compact spaces. SoCs can help fulfill this requirement by combining the functionality of multiple electronic components to save weight and space. Unburdened by heavy electronic equipment, a soldier can carry more water or ammo, and a UAV can be miniaturized while maintaining high performance characteristics.

Instant and frequent communications are paramount in military applications to provide situational awareness. At the same time operational security must be maintained. High signal processing bandwidth is needed to transmit audio in applications like software-defined radios (SDRs). Streaming live video in addition to audio is even more demanding. SoCs compressing data with the H.265 High Efficiency Video Coding standard and carrying out real-time encryption make it feasible to securely stream video from a UAV.

Navigation is another critical function in military activities. Precise, real-time positioning information anywhere in the world is a necessity for successful operations. SoCs have the potential to integrate inertial navigation units, accelerometers, and precision clocks on a single chip. With advancing technology, military systems may even someday harness atomic physics to be able to track position, orientation, and time completely independently from satellite GPS, gaining immunity to the signal jamming attacks of electronic warfare.

Engineers designing systems for the defense industry tend to prefer components that have a long track record of safety and reliability. As a result, a lag of 10 years or more can occur after the introduction of a new technology in commercial applications before it shows up in widespread operation in the military space. 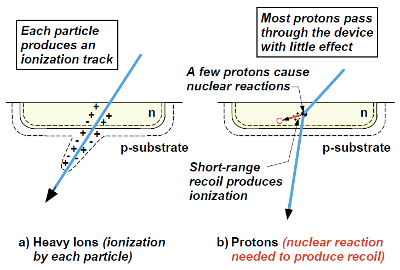 High-energy particles colliding with atoms in the N-P junction of a transistor, liberating a shower of charged particles and leaving an ionization trail that can create faults in the integrated circuit’s operation. Credit: NASA. (Click to enlarge)

For applications in which electronics will travel at high-altitudes or into space, or be used near nuclear reactors or in nuclear warfare, radiation-hardening is a necessity. One danger in these demanding situations is single event upsets (SEUs). SEUs are caused by ionizing particles from the environment colliding with a node of the device causing an unexpected state change leading to failure in functionality in devices that lack protection or corrective mechanisms for these events. A variety of techniques are employed to guard against the damaging effects of radiation, including physically shielding the package, manufacturing on insulating substrates, and implementing error correcting algorithms.

SoCs are time-consuming to develop; design, verification, and fabrication of a custom integrated circuit currently takes two and a half years for the U.S. Department of Defense. The Defense Advanced Research Projects Agency (DARPA) is funding a program that seeks to shorten the design cycle for custom integrated circuits to months rather than years. It has awarded contracts for its Circuit Realization at Faster Timescales (CRAFT) project to a number of corporations and universities, including the University of Southern California, the University of California, Berkeley, Carnegie Mellon University, Boeing, and Northrop Grumman. The project’s goals include increased reuse of intellectual property (IP) and embedding process complexity into reusable circuit components like macros, subcircuits, generators, and compilers.

Designing embedded systems is a multifaceted engineering exercise that requires the synergistic efforts of mechanical, electrical and software engineers. Creating components and systems that succeed in the demanding conditions of military applications while remaining on time and within budget is challenging. But the significant capabilities and benefits SoCs offer make the effort worthwhile.