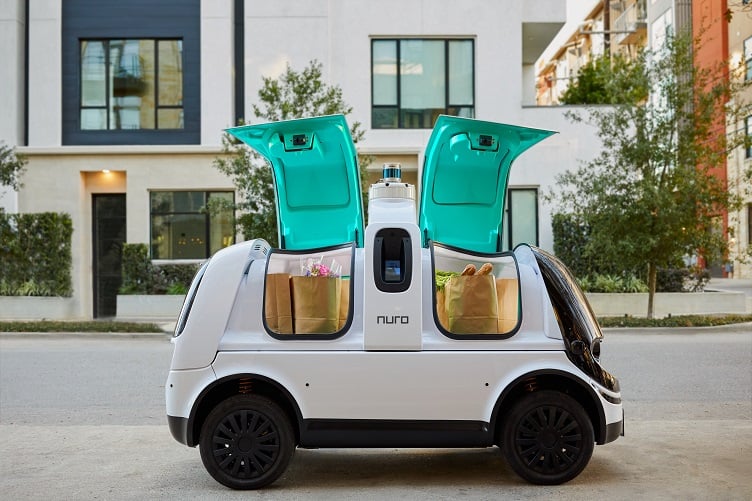 Nuro, a self-driving vehicle startup, has been approved by the U.S. Department of Transportation (USDOT) and the National Highway Traffic Safety Administration (NHTSA) for a regulator exemption for its R2 self-driving delivery vehicle.

Nuro claims it is the first company to be granted approval for a vehicle exemption. The R2 is built to carry packages instead of people for last-mile delivery of consumer products, groceries and hot food from local stores or restaurants. Nuro will begin public road testing of the vehicle for the first deliveries in Houston, Texas, in the coming weeks.

Previously, Nuro worked with grocery giant Kroger for unmanned delivery service in Scottsdale, Arizona, and said it provided deliveries for thousands of customers in the area over the last year with its first generation vehicle the R1.

The second generation R2 is a zero-emission vehicle with an improved engine to extend the vehicle’s lifespan. The vehicle also includes additional cargo space to haul more goods and it is better equipped for city-wide driving. Nuro worked with Roush, a Michigan-based product development supplier, to design and assemble the vehicles to include a sensor array.

The USDOT exemption allows for the R2 to be a zero-occupant vehicle, replacing the mirrors with cameras and other sensors. Likewise, the vehicle's rounded edges take up less road space and the windshield is removed from the vehicle. Instead of the windshield, there is a panel at the vehicle’s front that absorbs energy while a rearview camera helps provide a 360° view with no blind spots.

The next steps include the launch of the R2 in Houston and scaling up the services in the city by working with multiple partners. However, Nuro said modern regulations are needed for self-driving technology in order to enable these vehicles to become widespread in more cities while being deployed in the safest possible way. Nuro said it will work with the USDOT to build on new regulations designed for zero-occupant delivery vehicles as the agency has already begun the process.