SiC Foundry at the Scale of Silicon

X-FAB has established a 6-inch silicon carbide foundry line fully integrated within their 30,000 wafer-per-month silicon wafer fab located in Lubbock, Texas. With the support of the PowerAmerica Institute, X-FAB's goal is to accelerate the commercialization of SiC power devices by leveraging the economies of scale, automotive quality system and equipment set that have been established in of its silicon wafer fabrication line. 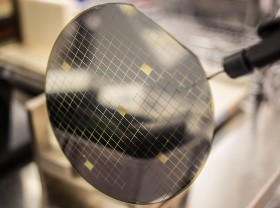 Source: X-FAB Texas, Inc. With its origins in the 1970s memory chip production era of Texas Instruments, X-FAB acquired the fab from TI in 1999 and converted it into an analog/mixed-signal facility, producing largely automotive-use ICs. That business will continue, but as new chip designs are targeted at 200-millimeter (8-inch) fabs, the Lubbock fab is ensuring its long-term survival by offering a 150-millimeter SiC power foundry capability.

In electrical vehicles, for example, IGBTs are used in almost all motor controllers today, but Wilson said automakers are expected to convert to SiC-based solutions in the 2022–2025 timeframe, if not sooner. “If they can convert to SiC, they can improve the efficiency, as well as reduce the size and weight, of the controller. That results in increased electric vehicle (EV) range — or in hybrids, improved fuel efficiency.” However, silicon-based IGBTs have a significant price advantage, based in large part on the cost differential of the starting substrates.

Bonding silicon and carbon into a largely defect-free wafer is a major challenge. Even the 4-inch SiC wafers have much higher defects — and costs — than silicon wafers. But SiC wafer manufacturers are rapidly porting the learning gained in 4-inch production to 6-inch SiC wafers, which is where X-FAB is focused. X-FAB’s Lubbock operation is “at the forefront of the transition from 4- to 6-inch wafers” for SiC IC production, Wilson said.