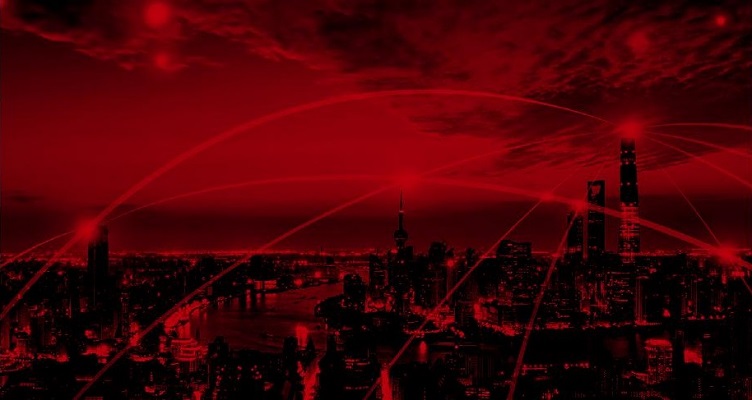 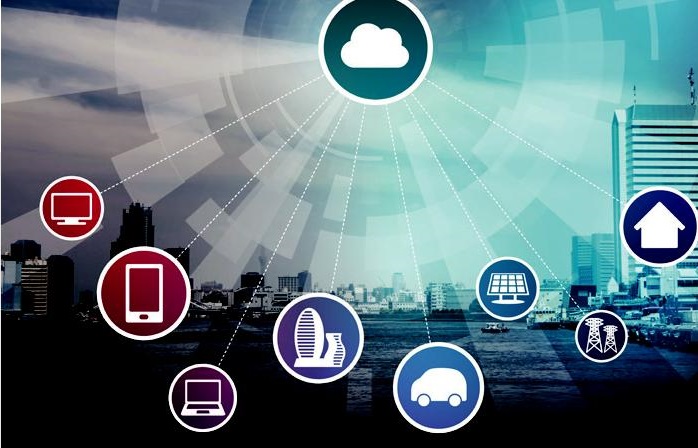 The combination of an exponential increase in simultaneous wireless connections, customer-driven feature enhancements, and the necessity for higher speed data rates in tomorrow’s 5G world, will require massive infrastructure improvements.It’s well understood that the technologies that will be used to usher in next-generation 5G wireless networks will be revolutionary. But before there is widespread adoption of any of these 5G technologies, there comes the need for extensive research and development of the networking and signal management approaches that will enable them. Currently considered one of the leading enablers, small-cell, millimeter-wave, and massive Multi-input Multi-out-put (MIMO) systems, are creating the need for network architects to not only know the comprehensive infrastructure design requirements of MIMO, but also the flexible and customizable signal testing solutions that these multi-path networks will require. This Tech Brief will provide an understanding of the various key factors of MIMO architectures, and introduce some novel ideas for testing and development of your own MIMO systems.

As all major telecommunications companies are looking to enhance their mobile networks to address the unprecedented wireless connection stability and signal integrity requirements of tomorrow, the number of devices that need a stable internet connection continues to escalate every day.

How much better is 5G predicted to be than 4G?In fact, Gartner, a technology research company, suggests that from smartphones and tablets, to cars and trains, wrist watches, garments, buildings, and machinery, there are 6.4 billion devices connected to the internet today. In 2020, they predict that number will be 20.8 billion!

Analyzing another data point, in 2015, 52.7% of all connections to the internet were made via mobile phone, and trend data suggests that average will be approximately 63.4% by the end of 2017. It’s no wonder then that seemingly impossible data rates of 10 Gigabits per second, enhanced spectral efficiency, significantly reduced latency, and dramatically improved power efficiency, are the goals of today’s 5G pioneers. 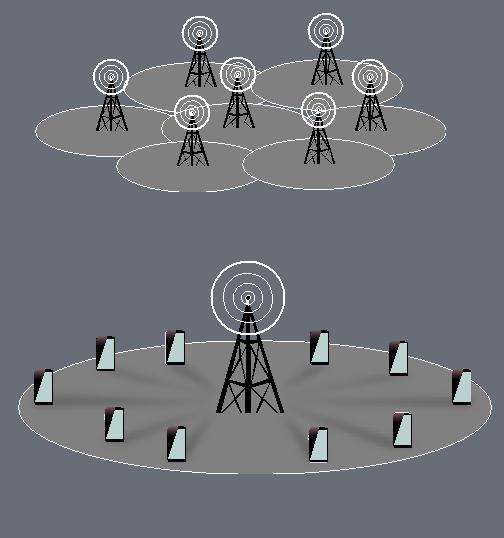 After small cells, 5G deployment has two promising candidate architectures (a) millimeter wave MIMO for dense urban environments and (b) massive MIMO to outfit current base stations with more antennas and allow for more spectral efficiency in a frequency range that offers very limited bandwidth as well as licensing issues.5G technologies are predicted to provide groundbreaking accessibility for wireless network users globally. But with this lofty goal comes many practical challenges. For instance, network providers are seeing an increased need for small cells to be installed in close proximity in urban environments to provide coverage to small and densely trafficked areas especially those with high-throughput demands. With the help of three types of Multi-Input Multi-Output (MIMO) architectures, system engineers are

Hardwired Small Cells are backhaul networks with fiber or copper connections to an established infrastructure. They offer fast connection and limited to zero interference, but are costly and take a long time to deploy. Mesh Network Small Cells offer access points that are lower cost and easily deployed, but are limited in range and are plagued by interference and latency issues. Hence, enhancements of this architecture with lower-cost and lower latency infrastructure are needed to bridge the gap between large area and low throughput macrocells and targeted, high-throughput small cells.

The advancement of millimeter-wave and massive MIMO solutions in response to upcoming 5G expectations suggests that the development of future small cell networks will include more advanced technologies and a heterogenous network approach.

Since there is a limitation of bandwidth in sub-6 GHz frequencies, providers are extending the communications spectrum into millimeter-wave technologies to provide a high level of throughput over short ranges.

Massive MIMO test bed set-up.The disadvantages of leveraging frequencies beyond 6 GHz is increased atmospheric attenuation, leading to shorter operating range and limited availability of cost-effective hardware solutions. There is also the extremely complex task of engineering wireless routing and handovers with the multiplicity of nodes and paths. Still, millimeter-wave technology does have the ability to provide higher data rates with low power consumption, higher quality connections with lower latency, as well as providing coverage in areas where traditional small cells or macro-cells won’t provide the needed throughput or spacial accuracy. Major network providers have already started investigating massive installation of millimeter-wave MIMO-based micro-cells in preparing to lay the foundation for a 5G infrastructure.

— a major requirement of 5G. Massive MIMO access points are equipped with hundreds of antennas, and can provide

an almost one hundred fold increase in efficiency without the need for separate base stations distributed through-out a high trafficked area.

Currently, multi-user MIMO (MU-MIMO) is being leveraged, which transmits multiple data streams to multiple devices as opposed to single-user MIMO that directs multiple antennas streams to a single device. MU-MIMO has the benefits of simple implementation with linear processing techniques and can eliminate the effects of uncorrelated noise and small-scale fading. The amount of interconnects, antennas, RF, and signal processing hardware increases considerably with the complexity of a massive MIMO system however, possibly prohibiting its use in some areas where the costs and infrastructure aren’t justified.

The typical linear processing technique used in MIMO is time division duplexing (TDD) where the uplink and downlink transmissions occur consecutively. Frequency division duplexing (FDD) is another lesser-used linear processing technique where uplinks and downlinks occur simultaneously at different frequency bands. But while FDD transmissions are faster, TDD systems also leverage channel reciprocity, a property that allows for an estimation of channel state information (CSI) at the transmitter. This property offers an elegant solution to improving signal quality in massive MIMO systems, and is thus becoming the preferred method for linear processing. 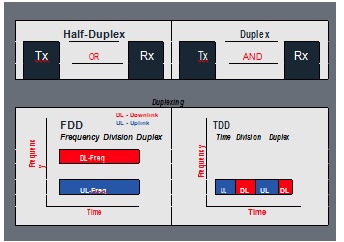 The duplexing technique, TDD is more often employed in MIMO systems today due to the ability to exploit channel reciprocity, a seemingly smart method to employ massive MIMO.

Having nearly solved their linearity issues, 5G engineers have more recently been working on their next biggest challenge: developing a number of precoding, or beamforming techniques, to successfully transmit and receive multiple signals from the same base station while still upholding performance and quality of service. The difficulty lying in developing beamforming techniques that scale with the high number of antennas at each base station.

With a number of notable and successful installations of massive MIMO systems to date, offering vastly enhanced spectral efficiency over current 4G networks, the future of massive MIMO is bright. But there is still much room for advancement. A known disadvantage to massive MIMO systems using TDD, for instance, is pilot contamination caused when a quick pilot sequence is used to estimate CSI at the receiver (CSIR). This is an iterative signal degradation problem when used in co-channel cells in a set-up including many massive MIMO systems. 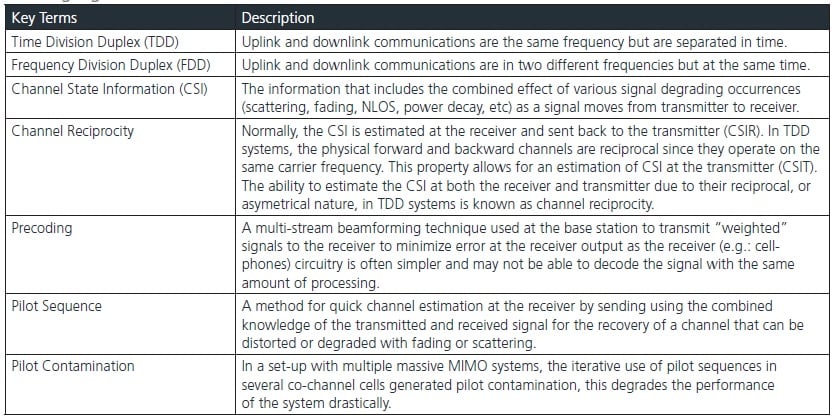 The language of MIMO: Key terminology in understanding the advantages and disadvantages behind Massive MIMO technology.

The race to establish 5G infrastructure as rapidly as possible comes with an increased need for robust and customizable test and measurement solutions that can handle various potential MIMO approaches. And as with any new and evolving technology, a common goal is also to do it all as inexpensively as possible. So keeping the testing solutions of these ever-changing MIMO technologies simple and accessible, is crucial. But until recently, that’s been easier said than done. MIMO exploits a multipath scenario, and the testing for each individual path often needs digital attenuation to adjust signal amplitude, and RF switching to allow for going back and forth between transmit and receive paths.

The advent of USB-powered portable test equipment has allowed for a streamlined and customized approach to these MIMO testing challenges—even in the most challenging of massive MIMO situations where large testbeds with over 100 antennas can be stacked together. The antennas and their respective RF circuitry in these testbeds often cause non-symmetry in the communication channel, and this first needs to be calibrated out before leveraging channel reciprocity. There are straight-forward techniques to calibrate these maturing systems today, but there is research being done on more effective testbed methods which only require a limited amount of CSI. These testbed solutions include software defined radios (SDRs), which include a component for time and frequency synchronization such as crystal oscillators, and a central controller, often a laptop. Research teams and field teams working in tandem with these new SDR-driven testbeds benefit from USB-connected RF switches that can lessen the number of RF ports required in these multichannel
scenarios.

Because it’s a moving target, the common goal in 5G development is to keep the testing of MIMO and other technologies as simple and low cost as possible. When evaluating portable test devices, look for vendors that offer a variety of frequency ranges and performance levels to keep up with your needs. They should also offer easy-to-install-and-use GUI’s, and the ability to operate multiple devices directly from a PC or self-powered USB hub, to effectively create an automated test equipment (ATE) stand on-the-fly. Compact packaging and robust construction will also allow your devices to stand-up over time to constant re-arrangement and transportation. They should also be easy to stack or place in a test rack, and API, DLL and LabVIEW compatible drivers should also be readily available.

In the race to 5G, the engineering teams who can not only design and develop, but test and deploy advanced MIMO systems effectively, will be the teams who come out on top.