Smart Cities: Four Predictions for 2018 and Beyond 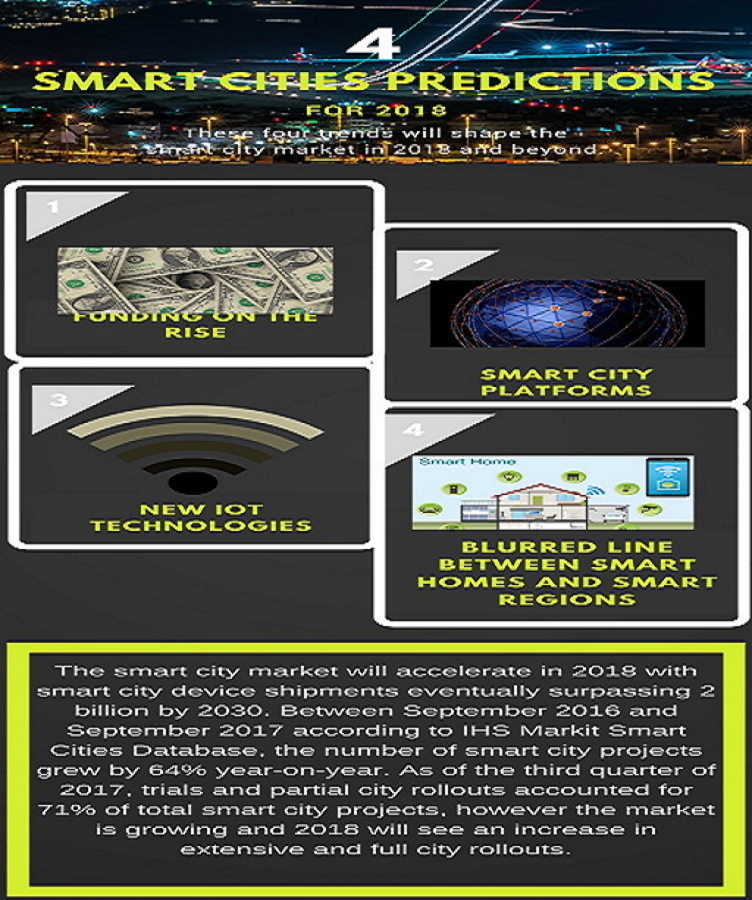 The New Year will see the smart city market ramp up, with smart city device shipments eventually surpassing 2 billion by 2030. The IHS Markit Smart Cities Database indicates the number of smart city projects grew by 64 percent year-on-year between September 2016 and September 2017. As of the third quarter of 2017, trials and partial city rollouts accounted for 71 percent of total smart city projects, however the market is growing and 2018 will see an increase in extensive and full city rollouts.

Smart street lighting is an application ready to move in scale as proven by the recent example of San Diego deploying the world’s largest Smart City IoT platform with Current, powered by GE, to transform street lighting into a connected digital infrastructure. Connectivity options are also quickly expanding in the market thanks to NB-IoT and LTE Cat-M1 deployments. During 2017, country-wide NB-IoT networks were deployed in the Netherlands and Ireland; LTE Cat-M1 is now available nationwide in the U.S.

IHS Markit highlights the top four trends that will shape the smart city market in 2018 and beyond.

The Funding Issue is Increasingly Being Addressed

The issue of funding has been one of the main problems within the smart city market, but IHS Markit sees public and private initiatives tackling this problem and fostering market growth for 2018 and beyond. Few initiatives were launched in 2017, and we expect more to come in the following years from both governments and industry players.

Countries understand the need for smart cities and actively work for their development: During 2017, many countries launched national challenges and funding in order to help the growth of the smart city sector.

Smart City platforms are a key element for the long-term smart city vision and many companies, from all backgrounds, are focusing on them. Network vendors, start-ups, telecom operators, software vendors and application providers look at the opportunity in the platform space.

Two major trends are identified: the expansion of horizontal, holistic platforms and the enhancements of vertical, specific platforms to target multiple vertical applications. The horizontal platform can be seen as representing a top-down approach where implementation of such a platform from the top is functional to ease expansion of multiple applications from the bottom. The vertical application platform expanding across verticals represents a bottom-up approach, where the needs of upgrading a specific application form the base that could be used for the expansion and improvement of other applications.

A New Wave of Technologies Rises on Top of the IoT

IHS Markit sees new technologies expanding on top of the IoT framework. Machine learning and artificial intelligence, edge computing, drones and blockchain will grow in 2018 and play a defining role in the future smart city.

AI can function as video analytics in security cameras to identify objects or recognize individuals and vehicles. It can also take the shape of chatbots easing citizens’ engagement and services. Examples include Los Angeles’ launch of Chip (City Hall Internet Personality) in May 2017, a chatbot helping people by offering answers, resources and guidance, and the Brussels’ Société Bruxelloise de Transport Public launch in August 2017 of a chatbot on Messanger to answer questions about things to do in the city.

A feature of the IoT and smart cities market is a growing emphasis on edge computing, drones and blockchain. Drones can be used for gathering data, mapping, maintenance and security; blockchain can be used to improve multiple applications including government services and payments.

Smart cities are entering the smart home market and engaging citizens by leveraging digital assistants such as Amazon’s Alexa, which is not the only means to bridge the smart city-citizen gap: mobile apps and social or video platforms can all be used.

In February 2017, Lousville worked with IFTTT, a web and mobile platform to bring city data into the citizens’ life. As a result of this partnership, a citizen can receive a smart watch notification when a new bill is pending, or receive a message on Facebook when air quality changes. Las Vegas launched an Alexa skill in June 2017 to provide information about city news and activities, parks’ information and others.

The smart city is also branching out as an element of smart regions in a trend that will shape 2018 and will continue accelerating in the coming years. An example is the UK’s Department of Transport initiative promoting smart ticketing across its countrywide rail network.