Rutgers engineers have created VibWrite, a smart access system that senses finger vibrations to verify users. The low-cost security system could eventually be used to gain access to homes, apartment buildings, cars, appliances, basically anything with a solid surface. 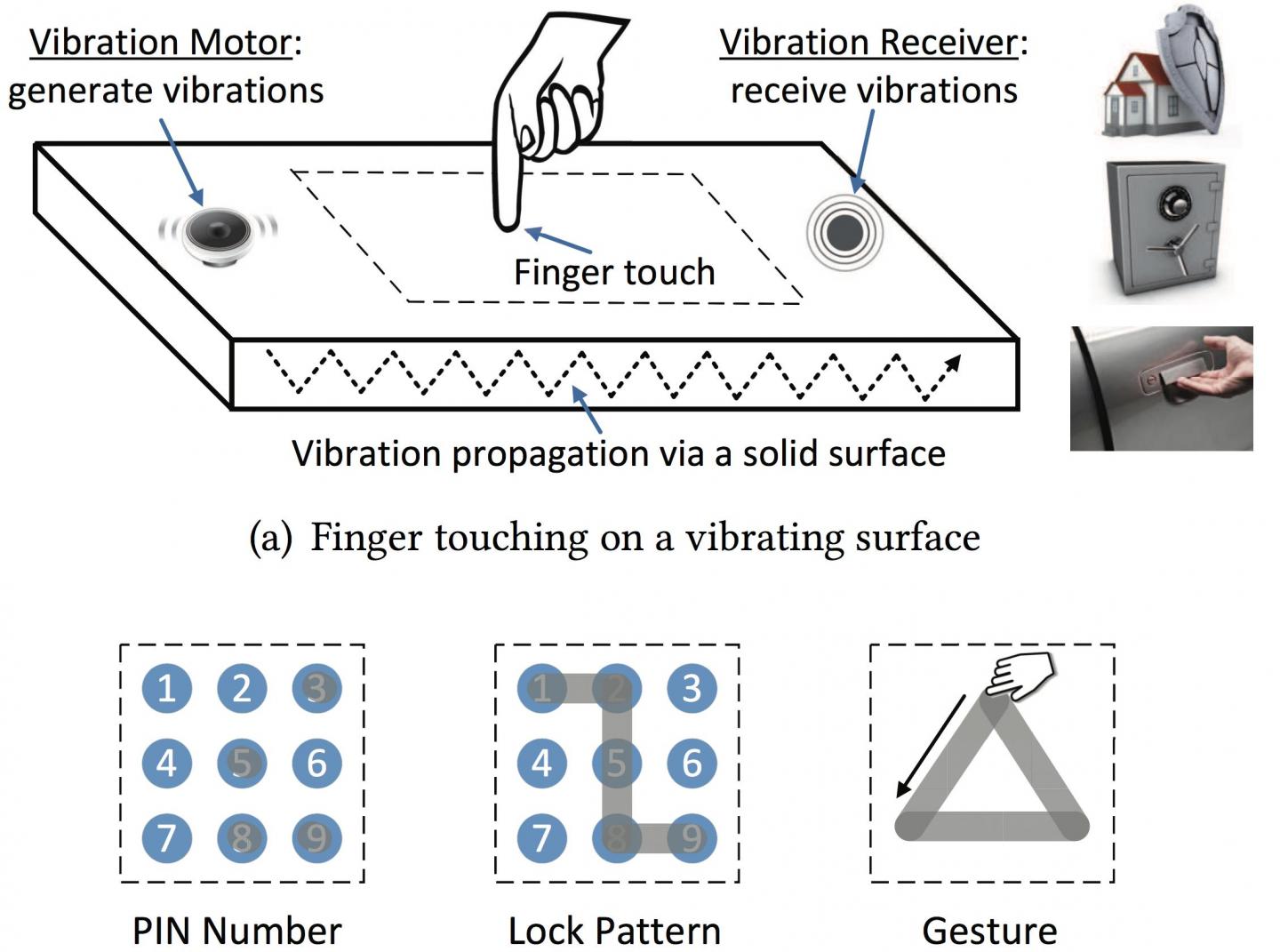 This is an illustration of a finger touching a solid surface with a sensor to detect vibrations. The VibWrite system can be linked to three types of pass codes for user authentication. (The DAISY Lab)

"Everyone's finger bone structure is unique, and their fingers apply different pressures on surfaces, so sensors that detect subtle physiological and behavioral differences can identify and authenticate a person," said Yingying (Jennifer) Chen, a professor in the Department of Electrical and Computer Engineering at Rutgers University-New Brunswick.

The goal of VibWrite is to allow user verification when fingers touch any solid surface. VibWrtie integrates passcode, behavioral and physiological characteristics. It builds on a touch-sensing technique by using vibration signals. It’s different than traditional, password-based approaches that validate passwords instead of legitimate users, as well as well as behavioral biometrics-based solutions that typically involve touch screens, fingerprint readers or other costly hardware and lead to privacy concerns and smudge attacks.

"Smart access systems that use fingerprinting and iris-recognition are very secure, but they're probably more than 10 times as expensive as our VibWrite system, especially when you want to widely deploy them," said Chen, who works in the School of Engineering and is a member of the Wireless Information Network Laboratory (WINLAB) at Rutgers University-New Brunswick.

VibWrite allows users to choose from PINs, lock patterns or gestures to gain secure access. The authentication process can be performed on any solid surface beyond touch screens and on any screen size. It is resilient to “side-channel attacks.” A side-channel attack is when someone places a hidden vibration receiver on the surface or uses a nearby microphone to capture vibration signals. It also resists several other types of attacks, including when an attacker learns passcodes after observing a user multiple times.

The VibWrite system is low-cost and uses minimal power. It comes with a vibration motor and receiver and it can turn any solid surface into an authentication surface. Hardware installation and maintenance is easy.

"VibWrite probably could be commercialized in a couple of years," Chen said.

During two trials, VibWrite verified legitimate users with more than 95 percent accuracy and the false positive rate was less than 3 percent. The current VibWrite system needs improvements because users may need a few attempts to pass the system. To improve performance, the Rutgers-led team will deploy multiple sensor pairs, refine the hardware and upgrade authentication algorithms. They need to further test the system outdoors to account for varying temperatures, humidity, winds, wetness, dust, dirt and other conditions.

The peer-reviewed paper on VibWrite was published on the ACM Conference on Computer and Communications Security, a flagship annual event of the Association for Computing Machinery (ACM).