Video: This Augmented Reality Toy Puts Holograms in the Palm of Your Hand 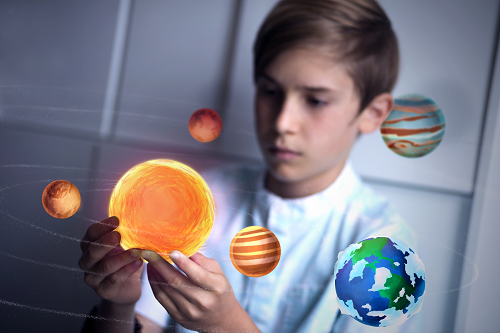 The Merge Cube using Galactic Explorer app to view the solar system in AR. (Source: Merge VR)It looks like something out of the horror film franchise “Hellraiser” but instead of delivering gnarly demons to your doorstep, Merge Cube does something so much better in delivering augmented reality that you can physically hold and interact with.

Merge VR, the maker of Merge Cube, claims the device is the first holographic toy that allows users to view, interact or even hold 3D objects in augmented reality.

The cube is compatible with iOS and Android devices and already has games and experiences built to support the device. Priced at $14.99, the toy is available at WalMart stores in the U.S. The Merge VR/AR Goggles come separately and are a bit pricier at $59.99.

Augmented reality, also known as mixed reality, allows people to view virtual worlds as an overlay of the real world, unlike virtual reality which is completely virtual.

The company is also launching its Merge Miniverse portal to connect apps and games to the Merge Cube. The web site will allow users to browse through apps to use with the Merge Goggles and Cubes as well as other AR/VR devices.

Current Merge Cube apps that enable AR on the device include:

Merge VR says there are more apps coming soon and is inviting developers to work with the company to create new apps and tools for the Merge Cube as part of its Merge AR/VR Developer Fund. Already VRX, Draw & Code, Steelehouse Productions, NextGen Interactions, Possum Interactive, Half Full Nelson, Cenda Games and Chicken Waffle are participating in the fund.

“The Goggles and Cube, paired with original apps and those coming in from third-party app developers, provide a hands-on, educational virtual space for a new generation,” said Andrew Trickett, co-founder of Merge VR.