Weld purging is the act of removing oxygen from the vicinity of a weld before, during and after welding metals such as stainless steel, titanium, zirconium or nickel alloys. In the absence of weld purging, the weld would be left oxidized and discolored, which could then lead to metallurgical imperfections and loss of corrosion resistance.

HFT created its range of Weld Purge Monitors in order to accurately read the residual oxygen level inside a tube, pipe, welding chamber, or enclosure during the act of purging. The PurgEye Desk is intended for use with welding chambers and enclosures as well as orbital welding machines and other automatic welding systems. 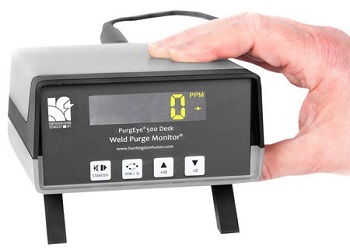 The system controls welding power sources such as orbital welding machines and any other automatic welding systems, to switch them on and off according to oxygen levels. The PurgEye Desk has automatic fault finding diagnostics which can report a range of possible faults, and it also features an organic light emitting diode (OLED) display, giving brighter, sharper readings at longer distances. The instrument is capable of measuring oxygen levels from 1,000 down to 1 part per million, (accurate to 10 parts per million).

The monitors are particularly suitable for use in ultra-clean conditions, such as in cryogenics, food and drink, semi-conductor, aerospace and pharmaceutical applications.