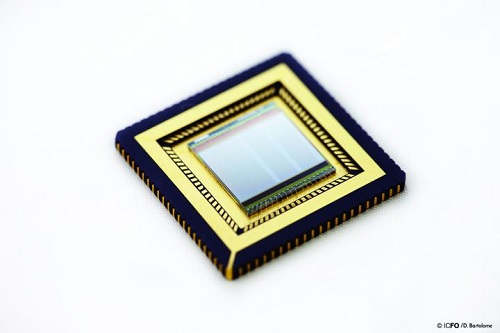 The image sensor, based on quantum dots and graphene. (Source: ICFO)Researchers at the Institute of Photonic Sciences (ICFO) have demonstrated a monolithic integration of a complementary metal-oxide-semiconductor (CMOS) integrated circuit with graphene and quantum dots (QD) to produce a high-resolution image sensor consisting of hundreds of thousands of photodetectors.

The team operated the device as a digital camera and saw that it is highly sensitive to ultraviolet, visible and infrared light at the same time. ICFO says this is the first time this has been achieved with CMOS image sensors and could lead to a wide range of new optoelectronic applications such as low-power optical data communications and compact and ultra-sensitive sensing systems.

Researchers fabricated the graphene-QD image sensor by taking Lead (II) Sulfide (PbS) colloidal quantum dots and depositing them on the chemical vapour deposition (CVD) graphene and then placing this hybrid system onto a CMOS wafer with image sensor dies and a read-out circuit.

“No complex material processing or growth processes were required to achieve this graphene-quantum dot CMOS image sensor,” says Stijn Goossens, a researcher at ICFO. “It proved easy and cheap to fabricate at room temperature and under ambient conditions, which signifies a considerable decrease in production costs. Even more, because of its properties, it can be easily integrated on flexible substrates as well as CMOS-type integrated circuits."

The quantum dots were engineered to extend to the short infrared range of the spectrum to the point where the researchers were able to detect the night glow of the atmosphere on a dark and clear sky enabling passive night vision.

The full research report can be found in the journal Nature Photonics.