The Role of Ultracapacitors in Automotive Technologies 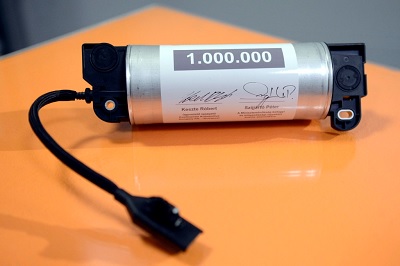 An ultracapacitor complements a primary energy source by supplementing power during periods of peak demand. They are able to quickly release or accept charge at a moment’s notice, and what an ultracapacitor lacks in storage capacity is overcompensated for by efficiency and life expectancy. They are able to quickly absorb energy, produce peak loads on demand and withstand repeated charge cycles without degradation. Essentially, they are a power storage device with an extended life expectancy.

In the automotive market, they have been integrated into conventional, electric (EV) and hybrid-electric vehicles (HEV) to help alleviate stress and extend the life of their batteries. They do so by adsorbing energy from an alternator or regenerative braking system and in turn supplying power during start up or propulsion. They are predominantly deployed in regenerative braking systems, start-stop systems and act as a short-term back-up power source during periods of high demand.

A start-stop system reduces fuel consumption and emissions by shutting down and restarting the engine in stop and go traffic. The shift from battery based to ultracapacitor based start-stop systems was due to its enhanced performance and extended life expectancy and first appeared in the 2010 PSA Peugeot Citroen.

Ultracapacitor based start-stop systems are now a standard feature in the 2017 European car of the year (COTY), the Peugeot 3008. The technology also made its debut in the North American auto market last year when General Motors introduced the 2016 Cadillac ATS and CTS sedans and ATS coupes with Continental ultracapacitor-based voltage stabilization system (VSS).

The Continental ultracapacitor-based VSS is able to start an engine twice as fast as conventional systems within 400 milliseconds. It also significantly extends battery life and offers an improved driving experience as the expedited start-up minimizes vibrations offering seemingly continuous operation.

There are now over two million vehicles on the road featuring Continental Automotive Systems’ VSS powered by Maxwell Technologies ultracapacitors. They supply the needed power to start an engine as well as help stabilize the vehicle’s electrical system during periods of high demand. Continental Automotive Systems’ VSS technology has become the Cadillac of start-stop systems, no pun intended.

Regenerative braking systems, also referred to as kinetic energy recovery systems (KERS), are supplemental to friction brakes and absorb kinetic energy through electromagnetic induction. The retardant force is able to slow a vehicle and store the energy either in a flywheel, battery or bank of capacitors. They must be used along with friction banks to completely stop a vehicle, but they increase efficiency and reduce the amount of heat produced from friction brakes greatly extending their life expectancy.

Energy transfer during braking and acceleration exists over short periods of time. To efficiently capture, store and release an electrical load over these short periods, a device needs to respond quickly, making the ultracapacitor-based systems an ideal candidate to help optimize efficiency and maximize performance.

Toyota's hybrid race car, the Supra HV-R, won the Tokachi 24-Hour Race in 2007 by a commanding lead of 19 laps. The results illustrated the enhanced performance of ultracapacitor-based KERS as Toyota used the technology to engineer a vehicle that was lighter and more efficient than its competition.

Use of ultracapacitors to augment the load on a battery enables car manufacturers to improve fuel efficiency, reduce CO2 emissions, extend battery life and reduce weight. The technology penetrates all types of vehicles from high-efficiency conventional, EV and HEV non-commercial vehicles to public transit and even high performance sport vehicles.

Demands for dramatic improvements in CO2 emissions to satisfy stricter emissions standards are ever increasing and to meet these demands car manufacturers migrate toward technologies that increase fuel efficiency. Ultracapacitors have already played a large role in meeting these needs in the European auto market and their proven performance suggests greater market penetration in the years to come.

Harvesting the Energy of Motion in Automotive Designs