Flexible Display Shipments to Increase in 2017

A recent IHS Markit release reveals that as more smartphone manufacturers build designs using flexible display technology, shipments of flexible displays are expected to reach 139 million units in 2017, an increase of 135% compared to 2016.

According to IHS Markit, a world leader in critical information, analytics and solutions, flexible displays are expected to comprise 3.8% of total display unit shipments in 2017. 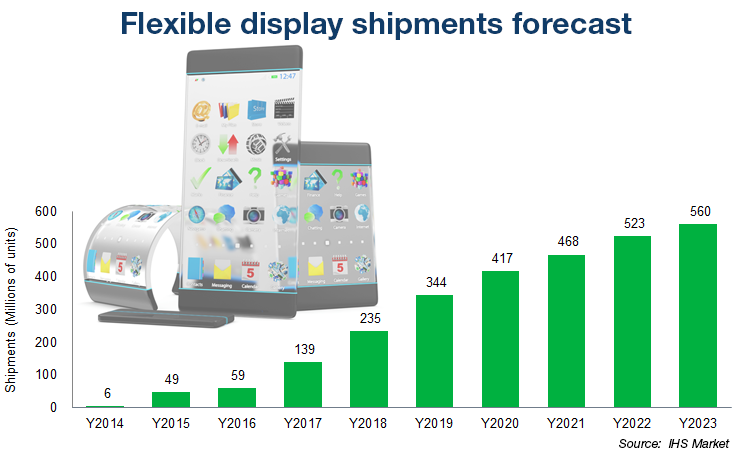 Vivo and Xiaomi launched their first smartphones with flexible active-matrix organic light-emitting diode (AMOLED) displays in 2016, while many other manufacturers have plans to develop their own foldable (or bendable, dual-edge curved) smartphone designs. In particular, Apple is expected to launch its new iPhone using flexible AMOLED display in 2017, which would dramatically drive up expected demand for flexible AMOLED panels. Flexible AMOLEDs are expected to comprise 20 percent of total OLED display unit shipments in 2017.

“During 2016, many smartphone manufacturers have pressured display panel makers to supply them with more flexible AMOLEDs for their new smartphone designs, however, due to limited production capacity only a few players had their orders met in quantity,” said Jerry Kang, principal analyst of display research for IHS Markit.

However, tight supply conditions are expected to change in 2017 once Samsung Display and LG Display start operating their new fabs to increase supply capacity for flexible displays, resulting in earlier availability of new smartphone entrants in the market.

“With new form factors entering the marketplace next year to entice consumers, smartphone manufacturers will find themselves locked in a fierce battle with one another as they jostle to win marketshare for their new smartphone models featuring dual-edge curved and foldable AMOLED displays,” Kang said.

According to the latest IHS Markit Flexible Display Market Tracker report, smartphones took up 76 percent of the total flexible display supply in 2016 with the remainder taken up by smartwatches. However, flexible display supply for other applications, including tablet PCs, near-eye virtual reality devices, automotive monitors and OLED TVs, is not expected to be significant until 2023.