The annual MEMS & Sensors Executive Congress wrapped up last week with a number of companies showcasing their latest works that utilize microelectromechanical systems (MEMS) to develop future applications from aerospace to automotive. 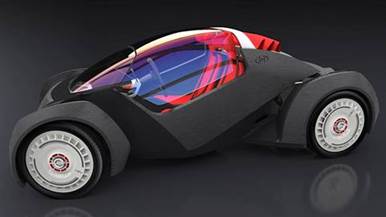 Local Motors’ highway car is built using 3-D printing and IBM Watson cognitive computing to run autonomously. Source: Local Motors Among the highlights from the show is Local Motors’ driverless electric car called the Strati. Local Motors says it used co-creation involving as many as 50,000 developers to create the car that uses 3-D printing to manufacture the vehicles, reducing the time to produce a car from years to months.

Local Motors is now working on the first 3-D-printed driverless car for highways.

Another highlight comes from XCOM Wireless and its partner Icarus Technologies Inc, which have created a concept aerospace device that helps to defend against drones. The device uses RF MEMS in a counter-drone that could be used to stop drones used unwittingly by dangerous hobbyists or military enemies using their own drones.

Finally, i-Blades was announced the winner of the 2016 Technology Showcase for its mobile Smartcase, a mobile phone case that forms a hard-wired smartphone connection that enables add-on MEMS and Internet of Things (IoT) technologies.