UAV Sales to Exceed $82 Billion Over Next 10 Years 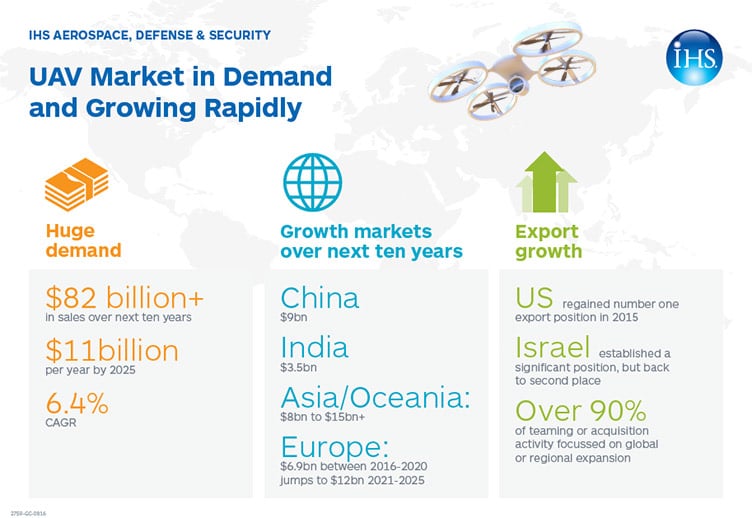 "It is possible that we will see much greater teaming between existing leaders and rising stars," says IHS Markit.

While very few markets are capable of demonstrating double-digit growth, unmanned systems have achieved that over the last decade.

A new study by IHS Markit, a world leader in critical information, analytics and solutions, discovered that U.S. demand and growing global expansion will drive the market for defense and security applications to achieve a compound annual growth rate of 6.4% , rising from $6 billion today to more than $11 billion per year by 2025.

US drives the market but big opportunities abroad

The U.S continues to drive the market through significant research and development and production sales, but there are growing opportunities from Asia/Oceania, Europe and the Middle East. Exports are also counting for a greater share of the overall market.

Overall, sales in Asia/Oceania will almost double from $8 billion in total sales between 2016 and 2020 to more than $15 billion in sales between 2021 and 2025. IHS Jane’s expect sales to more than double in China between now and 2025 to more than $9 billion due to growing investment and overall demand. “As tension builds in East Asia, so does advancements in UAV programs,” Maple said. “Strong growth is expected in India as well, due to its significant border requirements.” India is increasing its UAV budget to more than $3.5 billion over the next 10 years.

In Europe, sales are also increasing. Europe will spend $6.9 billion on UAVs sales between 2016 and 2020. During the next five-year period, sales will almost double to just over $12 billion.

“There is increasing teaming activity as suppliers try to capture greater markets and share new developments, with many nations investing in their own unmanned industries to compete more and more as we move into the next decade,” Maple said. “It is possible that we will see much greater teaming between existing leaders and rising stars.”

UAVs will require increased all-weather capability and a growing need for much greater integration between assets, whether manned or unmanned, the IHS Jane’s report said. In the longer term, stealth will play a greater role, and mission endurance will be pushed further – with systems for high-altitude and very long endurance emerging.

“Integration into non-segregated airspace is becoming critically important globally as operations expand, with rules and regulations needed to address this demand – for military and civil markets alike,” Maple said.