Nicolette Emmino
The Office of Naval Research (ONR) has sponsored a team of scientists that has genetically modified a common soil bacteria and used it create electrical wires-- thousands of times thinner than a human hair-- that can conduct electricity.

Shrinking electronics is not a new concept. As electronic devices expand function and applications, researchers seek technology that is smaller, faster and more powerful than ever before. With that research, advances in nanotechnology that allow industry experts to manufacture materials that are only billionths of a meter in thickness, have become possible. 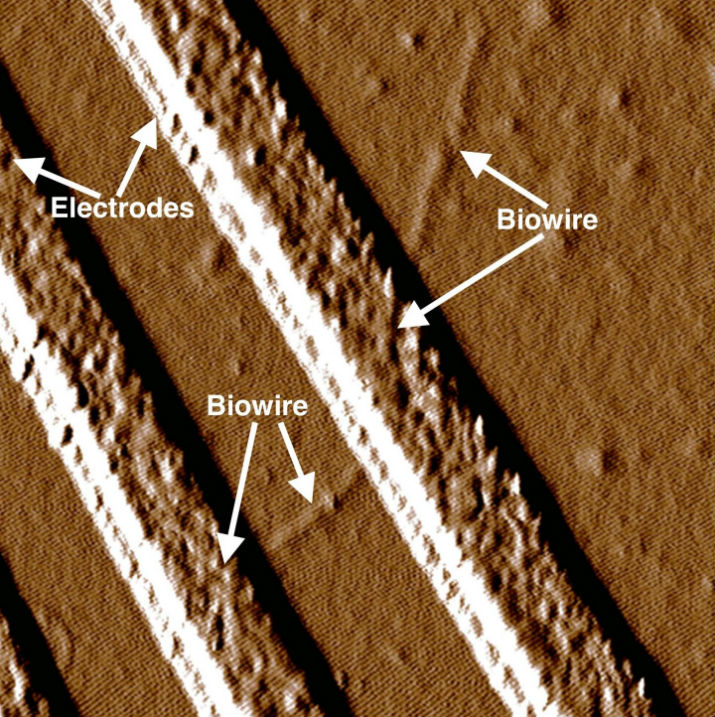 The nanowires could have a great impact on the future force, contributing to everything from smaller electronic devices to alternative fuels. (Image Credit: Dr. Derek Lovley)

According to the research team, led by Dr. Derek Lovley at the University of Massachusetts Amherst, the newly engineered wires can be produced using renewable "green" energy resources like solar energy, carbon dioxide or plant waste. They’re comprised of non-toxic, natural proteins and avoid harsh chemical processes that are traditionally used to create nanoelectronic materials.

"Research like Dr. Lovley's could lead to the development of new electronic materials to meet the increasing demand for smaller, more powerful computing devices," says Dr. Linda Chrisey, a program officer in ONR's Warfighter Performance Department, which sponsors the research. "Being able to produce extremely thin wires with sustainable materials has enormous potential application as components of electronic devices such as sensors, transistors and capacitors."

Lovely and the team created the new wires with Geobacter, bacteria that produces microbial nanowires, which are hair-like protein filaments protruding from the organism. These bacteria allowed them to make electrical connections with the iron oxides that support its growth in the ground. Geobacter naturally carries enough electricity for its own survival, but the current is too weak for human use. Although, it is enough to be measured with electrodes.

Lovley's team modified the bacteria's genetic makeup to replace two of the amino acids that are naturally present in the wires with tryptophan (that amino acid which is typically for the sleepiness you experience after Thanksgiving turkey). Tryptophan happens to be an effective means of transportation of electrons in the nanoscale.

"As we learned more about how the microbial nanowires worked, we realized it might be possible to improve on nature's design," says Lovley. "We rearranged the amino acids to produce a synthetic nanowire that we thought might be more conductive. We hoped that Geobacter might still form nanowires and double their conductivity."

The results exceeded the team's expectations. The tryptophan-infused nanowires were 2,000 times more conductive than their natural counterparts, as well as more durable and much smaller – with a diameter of 1.5 nanometers, which according to the researchers, is over 60,000 times thinner than a human hair). These results indicate that thousands of nanowires could potentially be stored in the tiniest spaces.

The team says that potential applications for these ultra-miniature nanowires include continually shrinking electronic and computing devices. One example of this is in medical sensors that monitor heart rate or kidney function.

Since ONR is sponsoring the research, there’s a set of potential military applications. The nanowires could feed electrical currents to specially engineered microbes to create butanol, an alternative fuel, which would be useful in remote locations like Afghanistan, where fuel convoys are often attacked. In these areas, it can cost hundreds of dollars per gallon to ship fuel to troops.

In addition, the nanowires could also play a role in powering sensitive microbes that could be placed on a silicon chip and attached to unmanned vehicles in order to detect pollutants, toxic chemicals or explosives.

"This is an exciting time to be on the cutting edge of creating new types of electronics materials," says Lovley. "The fact that we can do this with sustainable, renewable materials makes it even more rewarding."