I Spy in 2016 — Are We Ready for an Increased Maritime Threat?

We know they’re spying. They know we’re spying. It’s common knowledge. While maritime spying is heating up, a new threat may very well enter the waters delivering even more chaos.

The world is a dangerous place. In just the first few months of 2016, announcements of spy planes, ships and incidents include:

As you can see – it’s getting a bit crowded out there.

The U.S. Navy is caught in a bind with too little in available funding to order and take delivery on all of the state-of-the-art vessels it says it needs. While it is able to obtain some of them, it is also modifying and deploying new sensors and systems to render each of its existing vessels—large and small—more lethal. New construction includes amphibious assault ships, combat and smaller vessels as well as littoral combat ships (LCS). Given Russia and China’s advanced military might and weaponry now in the hands of Middle East factions, the service must find ways to implement force for the dollars it has. A few of its programs include: 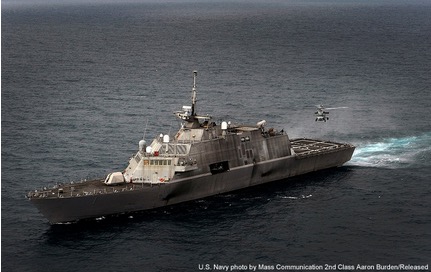 Figure 1. USS Freedom (LCS-1), the first in the Lockheed Martin Independence Class of littoral combat ships. Photo: U.S. NavyThe Navy has also developed with Northrup Grumman, interchangeable mission modules for anti-surface, anti-submarine, and mine countermeasures for use with its LCS class vessels. The modules consist of weapons and sensors and support gear. When the mission personnel and helicopters are included, the modules turn into mission "packages."

The Navy’s laser weapon system along with electromagnetic rail guns (EMRGs) that fire superfast hypervelocity projectiles (HVPs), are being developed. EMRGs powered by magnetic force is under test to launch an HVP up to 5,600 miles per hour.

Integrated electric drive (IED), according to the Navy, is critical to providing the intense bursts of power needed by the AMDR and laser and electromagnetic weapons, going aboard Flight III Burke-class destroyers and the future surface combatant, also called DDG-51 Flight IV.

Today, three amphibian units: the Makin Island (LHD-8), America (LHA-6), and Tripoli (LHA-7, under construction), are powered by a hybrid electric drive (HED) plant consisting of GE LM2500 gas turbine engines and an all-electric auxiliary system. The Navy claims an $18,000 savings per day in fuel costs on its first deployment.

We are no strangers to terrorism on the high seas. The suicide bombing of the Cole and Somali pirate attacks support the existence of such terrorism. 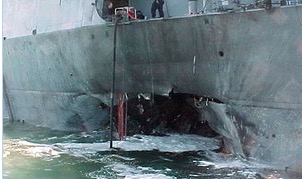 The USS Cole, which was targeted by Al-Qaida in Yemen in 2000, killing 17 sailors. Photograph: ReutersNow, however, Vice-Admiral Johnstone, a Royal Navy officer indicated that ISIS has ambitions to mount seaborne operations. A NATO naval officer concurs stating that ISIS wants a Navy to attack cruise ships or container ships. The claims are not without substance. During the first quarter last year, the province of Barqa on the Libyan coast was declared by the radical Islamic Youth Shura Council to be an Islamic emirate—thus an extension of the Iraqi/Syrian caliphate claimed by the Islamic State.

ISIS militants now patrol the town in Islamic police and the black flag is flying over some buildings. Not only does ISIS control the town’s port and seaport of Ras al-Helal, near Derna. The group has boats large enough to cross the Mediterranean to southern Europe—not an easy but possible journey, especially when people are expendable. The question is will it, or will it carry out suicide missions Al-Qaida style?