Texas Instruments (TI) held its Innovation Challenge North America Design Contest award ceremony on July 27, 2015. Winning projects from this year’s design contest included solutions that will change how the physically disabled create music; how the hearing impaired communicate with others; and how unmanned search and rescue missions are carried out.

Winners were Troy Bryant and Sean Lyons from the University of Florida, recognized for their project, Seven Deadly Synths: A non-contact synthesizer. Bryant and Lyons designed a musical device that could be operated without advanced motor skills. Using TI technology, ranging from power management to a microcontroller (MCU) to signal chain, the team used 35 TI components to build a synthesizer instrument that can be usable by musicians of all skill levels. The device enables disabled musicians to create sounds using simple movements, such as the wave of a hand.

"Students are boundless in their creativity because they see the world through a lens of limitless possibilities," says Steve Lyle, director, engineering workforce development and university marketing for TI. "The entire focus of the TI Innovation Challenge is to empower engineering students to think through design challenges and to come up with creative solutions that address issues people face today. The winning teams this year represent an impressive array of both problem-solving and diversity of thought, and TI is proud to have the opportunity to work with these young engineering minds." 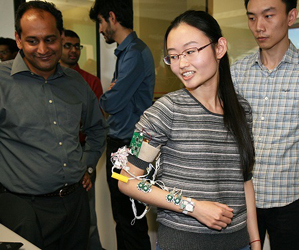 During the 2014-15 school year, 300 teams participated in the TI Innovation Challenge. Winning projects are selected for their use of engineering practices and are judged on criteria such as originality and creativity of the application, complexity and quality of the design and effective use of TI technology. Cash prizes were awarded to the top three winners: $10,000 for first place, $7,500 for second place, $5,000 for third place and $2,000 for categorical prize winners.

The 2016 North American TI Innovation Challenge Design Contest will open in September to eligible contestants in the United States, Canada and Mexico.