These days, when Apple Inc. decides to jump into a market, consumer demand reacts in extreme fashion.

With the arrival of the Apple Watch in the first quarter of this year, the market for wireless power and charging in wearable applications is set to grow colossally, expanding some 3,000 percent compared to 2014, according to a new report from IHS Technology, which owns Electronics 360.

Revenue from shipments of wireless power receivers and transmitters in wearable applications will rise to more than $480 million this year, up from just $15 million in 2014. By 2019, wireless charging in wearables will generate revenue exceeding $1 billion, as shown in Figure 1. 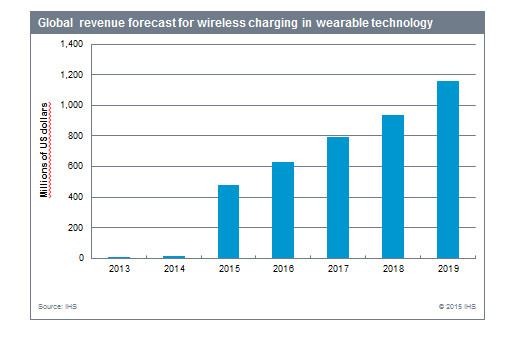 While the Apple Watch won’t be the only wearable electronics device to include wireless charging in 2015, it will be the highest profile of those introduced. Of the total number of wireless charging-enabled devices forecast to be shipped to the wearables market in 2015, the Apple Watch is projected to take a dominant share, accounting for more than 70 percent of total revenue, IHS said.

When Apple unveiled the Apple Watch, it did so without promoting the benefits of wireless charging technology that will be included in the wearable device. But when it ships, the smartwatch will include Apple’s proprietary MagSafe inductive charging offering. As a result, IHS believes the Apple Watch by default will generate increased awareness for wireless charging.

IHS believes that by the end of 2017, these types of new wireless charging options will overtake inductive or tightly coupled solutions as the dominant option in the wearables market.