Don’t expect a slowdown in sensor growth in smartphones and tablets in the next five years as revenue will expand to $6.5 billion by 2018, according to an IHS Technology report. 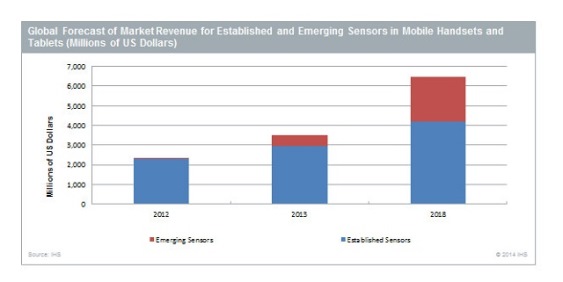 “The next wave of sensor technology in smartphones and tablets has arrived,” said Marwan Boustany, IHS senior analyst for microelectromechanical systems (MEMS) and sensors, in a statement. “Led by Apple and Samsung, the mobile market is moving beyond simply integrating established devices like motion sensors and now is including next-generation features like fingerprint and environment/health sensors. Adoption of these newer devices will drive the expansion of the mobile sensor device market in the coming years.”

One of the largest markets forecasted to make an impact in the next few years is fingerprint sensors, IHS said. Shipments of fingerprint-enabled devices is expected to rise to 1.4 billion by 2020, more than four times the 317 million units shipped this year. The rise of these sensors is the result of their inclusion in new Apple devices but Samsung has also got into the act with its Galaxy S5 and Huawei’s Ascend Mate 7.

“This fingerprint market has all its requirements for success converging at the right time,” Boustany said.

The reason for this is that fingerprint sensors play a role in mobile payment services for services such as Apple Pay as well as support for Visa, MasterCard and PayPal that are working on mobile payments and biometric authentication.