Earlier this week, Apple’s iPhone 6 and iPhone 6 Plus as well as the Apple Watch were announced that the devices will contain near field communication (NFC) technology.

Dubbed Apple Pay, the Apple NFC payment program will be available in the U.S. and will begin in October of this year. IHS Technology forecasts shipments of NFC-enabled handsets will grow to 430 million in 2014, up from275 million in 2013, as shown in Figure 1. 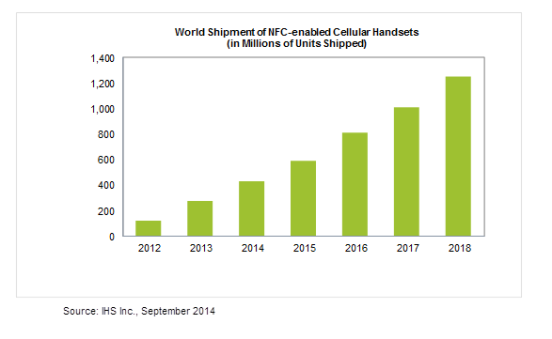 Some of the key features to Apple Pay include:

IHS believes that Apple Pay will no doubt help the drive toward NFC payment and mobile payments in the U.S. It could even be a virtual “shot in the arm” for the entire NFC ecosystem and NFC payments in particular. IHS sees Apple Pay as a big threat to other mobile wallets in the U.S. including Google Wallet and Softcard (formerlyISIS).

However, there is a long way to go before NFC payments and mobile payments enter the mass market. Customers will be able to use Apple Pay in approximately 22,000 merchant locations across the U.S. that have contactless payment enabled. This represents a good starting point but is still a drop in the ocean compared to the 9 million or so merchant locations in the United States.

Any new payment system that is launched onto the market needs to take into account the high security and privacy concerns of consumers. This is particularly important in light of the security breaches at Target, Neiman Marcus and recently Home Depot.

IHS expects the list of retailers accepting Apple Pay to grow as the system gets more consumer friendly and will also help in the U.S. migration to the Europay, Mastercard and Visa (EMV) standard, which is starting to gain momentum. Any retailer not working already on EMV migration is more than likely to replace point of sale (POS) terminals with EMV contactless and NFC compliant terminals in light of Apple’s new products.

In summary, Apple’s announcement of incorporating NFC into its latest iPhones and Apple Watch is certainly a good start in helping drive NFC payments from geek street to main street!