With revenues amounting to $740 million, Germany’s Bosch emerged as the No. 1 supplier of automotive microelectromechanical system (MEMS) sensors in 2013, according to a new market research report from IHS Technology.

Bosch’s revenue stream rose 13.3 percent from the $653 million it garnered in 2012 based on its strong captive market for Tier 1 customers. As Bosch supplies the automotive market with accelerometers, gyroscopes, pressure sensors and flow sensors used in safety, powertrain and telematics applications, the company was able to increase its lead over the nearest competitor, Denso, by more than three times.

While automotive MEMS suppliers are being squeezed by price erosion, shipments are expanding strongly. In 2013, shipments grew at 13 percent, up from 11 percent in 2012. But due to deep price cuts in safety applications such as electronic stability control (ESC) and tire pressure monitoring systems (TPMS), revenue growth for overall automotive MEMS suppliers grew at a meager 3 percent, IHS said. 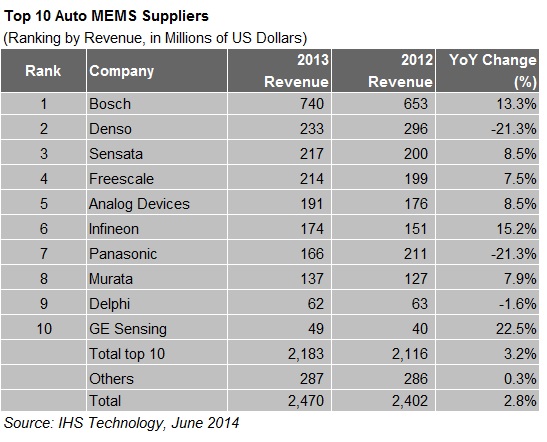 “While Bosch was out front and even increasing its lead, other suppliers were much closer together last year in a tightly knit pack,” said Richard Dixon, Ph.D., principal analyst for MEMS and sensors at IHS in a statement. “The tighter competition among Bosch’s other rivals is due to Denso and Panasonic declining in dollar terms—while others like Sensata, Analog Devices and Infineon not facing this drawback took advantage of the situation to close the gap.”

The decline felt by Denso and Panasonic was the result of an overall 22 percent drop in the value of the yen in 2013, wiping out a large part of the their revenue. Other Japanese MEMS suppliers that were not in the Top 10 – Epson Toyocom and Fuji Electric – also were impacted by the drop in yen value. Panasonic’s revenue fell 21.3 percent from $211 million in 2012 to $166 million in 2013. But it also fell in its rankings dropping out of the No. 3 spot all way to No. 7 of the 2013 top automotive MEMS suppliers.

For other automotive MEMS suppliers, the drop by the Japanese companies was a boon. Sensata Technologies rose two places to No. 3 in 2013 with $217 million in revenue, up from $200 million in 2012. Sensata is the world’s only commercial supplier of a MEMS cylinder pressure sensor, used by Volkswagen and Daimler diesels and ranks second only to Bosch in pressure sensors, according to IHS.

Freescale Semiconductor came in at No. 4 in the Top 10 with Analog Devices in the fifth spot and Infineon Technologies at No. 6.

Freescale rose 7.5 percent to $214 million last year, up from $199 million in 2012, based on its success with side airbags in the North American market and solid sales for its accelerometers. Airbag accelerometers were also the reason that Analog Devices’ revenue rose 8.5 percent in 2013 to $191 million, up from $176 million in 2012. Finally, Infineon climbed 15 percent in 2013 to $174 million, up from $151 in 2012, the back of its strong position in TPMS despite price erosion.