The Internet of Things and Its Web of Connectivity

The thought of an Internet of Things made up of 26 billion uniquely identifiable objects only begins to convey the breadth of functionality required to enable connectivity on this scale. The sheer variety of applications precludes one technology from meeting all demands. To accommodate the diverse nature of the IoT, the market must field a heterogeneous mix of communication technologies, tailoring qualities like energy efficiency, security, and reliability to cater to the unique needs of individual applications.

As the IoT matures, however, market forces are likely to reduce the level of diversity. “We are going to see a winnowing down of the connectivity technologies to a more manageable number,” says Bill Morelli, Associate Director, Internet of Things and M2M, IHS. “There will be some clear winners, but you can still expect to see a pretty healthy range of technologies.”

The big question is: Which technologies will survive the market’s natural selection process? The answer to this question cannot be gleaned solely by analyzing the various systems’ operating parameters. “You have to look beyond technical limitations of a technology,” says Lee Ratliff, Principal Analyst, Connectivity & IoT, IHS. “To be considered for an application, a technology has already proved itself serviceable. Other technologies may be superior, but quite often that doesn’t matter. It’s more about the competitive dynamics of the various technology alliances.”

A good place to see these dynamics in play is in short- and medium-range connectivity standards, where the technologies are bringing sensing capabilities to previously unconnected devices. Leading standards in these two categories include wired and wireless technologies like Ethernet, Wi-Fi, Bluetooth, ZigBee, and Z-Wave.

A wireless personal-area network technology that offers both time-tested communications and groundbreaking features, Bluetooth comes in two forms: Classic and Smart. Both versions of the standard operate in the 2.4 GHz ISM frequency band.

Taking aim at devices with high demands, small footprints, and limited energy budgets, the developers of the Classic standard optimized the radios to transmit continuous streams of data, making them suitable for industrial motion controllers, streaming medical sensors, gesture control inputs, music, and voice. With peak current consumption of <30 mA, the technology has a throughput rate of 2 Mbps and a range of as much as 100 m. For some of the latest emerging applications of the IoT, this simply is not enough.

To meet demands for energy-efficient connectivity, the designers of Bluetooth Smart took a new approach, optimizing the new specification to accommodate devices requiring short, quick bursts of data, not continuous streams. These devices achieve their energy efficiency by remaining in sleep mode most of the time, waking only when a connection is initiated, quickly transmitting the data, and then returning to sleep mode. Bluetooth Smart radios cycle through these steps in 3 ms, as opposed to the 20-30 ms required by Classic Bluetooth. This efficiency results in average power consumption of only about 1 µA, which enables Bluetooth Smart devices to operate on a coin cell for as long as 10 years. The downside of this feature is that throughput is only about 100 Kbps, and the range of the radios is limited to 250 m. With its energy efficiency and optimization for periodic transfer of small amounts of data, Bluetooth Smart targets health and fitness monitors, wearable computing systems, and home automation devices like smart locks and light bulbs.

Bluetooth derives its most significant competitive advantage not from features like energy efficiency or reliability but from the fact that it has native operating system support in nearly all mobile platforms. “The radio technology is in every device,” says Suke Jawanda, CMO of Bluetooth SIG. “Any device that uses that operating system is primed to become a Bluetooth Smart-ready hub. The consumer already has the technology in his or her hand.” 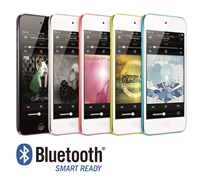 Native operating system support of Bluetooth Smart and Wi-Fi on mobile platforms goes a long way toward cementing the technologies’ place in the IoT because many see smartphones and tablets becoming universal information hubs. (Courtesy of Apple Inc.)

Wi-Fi is a local-area network technology based on the IEEE 802.11 standard and optimized for high-speed, large data transfers, the very opposite of Bluetooth Smart. Unfortunately, the cost of this performance is high energy consumption, which precludes using Wi-Fi to support battery-powered devices.

Nevertheless, Wi-Fi enjoys widespread use, and its ubiquity positions it to play a key role in the IoT. This is affirmed by its presence in everything from smart phones and tablets to TV sets, home hubs and routers, and industrial automation networks. As the number of devices connecting to the Internet increases, Wi-Fi will provide a bridge to wide-area and metropolitan networks, which will ultimately provide access to the Internet. For example, Wi-Fi improves mobile device usability by offloading data traffic from cellular networks at hot spots and in enterprise and home Wi-Fi networks. The standard also extends the Internet to home appliances and consumer devices such as gaming consoles, set-top boxes, and home automation gateways.

Wi-Fi already has a presence in the smart home, providing connectivity to devices like the Nest thermostat. (Courtesy of Nest Labs.)

Like many of the connectivity technologies enabling the IoT, Wi-Fi is a work in progress, and its designers constantly push performance limits on multiple fronts. Wi-Fi began its evolution with the introduction of 802.11.b, which functions in the 2.4 GHz band, offers throughputs as high as 11 Mbps, and can transmit signals as far as 35 m. Since then, 802.11a (5 GHz band) and 802.11g (2.4 GHz) have emerged, sporting incremental improvements, but it was not until 802.11n made its debut that users saw a real boost in its performance. This version transmits in both the 2.4 GHz and 5 GHz bands and offers multiple-input multiple-output (MIMO). The additional transmitter and receiver antennas implementing MIMO enable greater throughput through spatial multiplexing and extend the radio’s range by exploiting spatial diversity. This version of Wi-Fi enjoys speeds as high as 100 Mbps.

Like Wi-Fi, Ethernet enjoys such a broad deployed base that it is guaranteed a place in the IoT. Even so, wireless connectivity advantages like lower installation cost and ease of deployment are displacing Ethernet in application areas such as consumer, enterprise, and building automation networks. One environment, however, will continue to rely on Ethernet as its link to the IoT: industrial automation. Here the standard’s speed and reliability translate into near-determinism, a must-have feature for manufacturing’s mission-critical processes.

“You are seeing a long-term trend of Ethernet becoming even more deterministic and reliable,” says Bryan Tantzen, Director of Engineering for Internet of Things Business Group, Cisco. “It’s already good enough to be used for real-time production control and automation networks.”

Much of this determinism springs from Ethernet’s speed. The most common Ethernet systems are called 10BASE-T, and they provide transmission speeds as high as 10 Mbps, but there are much faster versions. Fast Ethernet, or 100BASE-T, has transmission speeds of 100 Mbps, and gigabit Ethernet promises 10 Gbps.

But Ethernet’s appeal goes beyond speed and determinism. “Ethernet has much more potential to be kept secure than some of the other networking technologies,” says Tantzen. “With our Ethernet switches, we can enforce security policy in the network itself. Managed switches support identity services and policies so that you can fine tune access control.”

Battle for the Smart Home

Unlike Ethernet’s well-established position in the manufacturing sector, two companies are locked in an intense competition for dominance in the low-power, smart home market, taking aim at applications ranging from smart locks and intelligent lighting to remote controls and smart meters. ZigBee and Z-Wave both promise low-power operation and rely on mesh networking, a feature that delivers reliability essential to the IoT, but that is where the similarities end.

ZigBee is a global standard that operates in the 2.4 GHz band, using robust direct sequence spread spectrum modulation and offering practical support for 500 nodes and a range of less than 10 m. ZigBee’s standardization is backed by a large base of chipset and software providers, which is appealing to manufacturers and promises broad interoperability. The standard also boasts multiple layers of security, including 128-bit encryption, elliptical curve cryptography, and certificates for exchanges.

ZigBee draws its greatest strength from its market relationships, such as its adoption by Comcast for Xfinity Home, endorsement by the Connected Lighting Alliance, and its near-lock on the smart meter market. The standard, however, is not without its weaknesses. Operating in the 2.4 GHz band exposes devices to significant interference. The alliance also has had problems with vendors playing fast and loose with certification requirements, resulting in inconsistent interoperability. 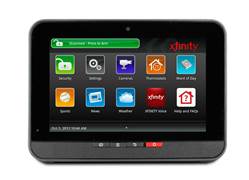 Service providers such as Comcast are expanding the reach of smart-home products like this Xfinity Home touch screen controller by integrating wireless technologies like ZigBee that provide last-mile connectivity for the IoT. (Courtesy of Comcast.)

Z-Wave, on the other hand, is a proprietary RF-based standard designed for residential and light-commercial monitoring and control applications, such as home entertainment, lighting and appliance control, HVAC systems, and security. The standard supports 256 nodes, and offers a range of roughly 30 m. Z-Wave’s choice of the sub-gigahertz frequency range — around 900 MhHz — is a strength and a weakness. While it enables superior range, it also requires different frequencies for the various regions of the globe, compromising interoperability. On the supply chain side, Z-Wave suffers from a smaller number of suppliers. Only Sigma Designs and Mitsumi manufacture its chipsets.

The alliance has its market relationships, too, counting companies like Lowe’s and VeraControl as partners. The problem is that neither of these has the same market presence as Comcast and the Lighting Alliance.

Ultimately, Z-Wave’s greatest strength is the fact that its technology is tailor-made for the home automation sector, and its performance reflects that.

As predicted by IHS's Morelli, there will be clear winners among the connectivity technologies competing for a permanent role in the IoT. It is, however, too early to know which ones will come out on top.

What is being decided now are the features and operating parameters essential for the IoT’s success. Key among these are energy efficiency, interoperability, security, and a strong market strategy.