Ahead of the Curve: Samsung, LG Debut Flexible Displays

Marketing gimmick or harbinger of things to come?

The recent launches of Samsung's Galaxy Round and LG's G Flex are undoubtedly a little of both and, in any case, provide a useful glimpse into the current state of the art of flexible display technology ahead of the 2014 Consumer Electronics Show (CES).

To date, the Galaxy Round is available for service only in South Korea—and the LG in South Korea and selected other Asian markets—although LG has announced it will sell the G Flex in the U.K. and Europe starting in February 2014. But at prices approaching US$1,000 in most of these markets, these fledgling flexible display phones are likely of appeal mostly to early adopters.

"One of the biggest challenges in this market is high cost due to lower manufacturing yield rates," said Sweta Dash, senior director of display research and strategy at IHS. "The production cost has to be reduced and the process and materials have to be improved. We think it may take another one or two years before we see truly flexible products at reduced costs."

Samsung has been the leading producer of OLED panels since their introduction in 2007 and now has over 90 percent of market share. The company has reportedly been working to produce the technology behind a workable flexible display for several years, and Galaxy Round is the result.

While incorporating a flexible plastic display substrate, the phone itself is not flexible. The phone does, however boast a vertical concave shape—with curvature radius of 400 mm—which leaves the sides of the unit slightly higher than the middle when the unit is lying face-up.

Those who have tested the device report that the shape indeed improves the feel of the unit in the hand, against the face, and when placed in one's clothing pocket for storage. Similarly, the curve is designed to help minimize the problem of glare when the unit is being used outside.

The Galaxy Round's fully HD super-flexible AMOLED display measures 5.7" on the diagonal with a resolution of 1080 x 1920 pixels at a density of 386 pixels per inch. As with Samsung's Galaxy Note 3, the Round's display employs a Pentile matrix arrangement with diamond-shaped sub-pixels.

With a touchscreen composed of Corning's Gorilla Glass 3, the unit weighs in at 154 grams. 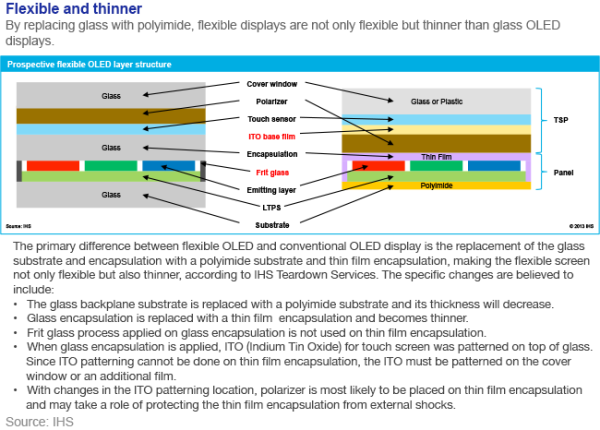 LG's G Flex made its debut just days after the introduction of the Galaxy Round. Like its competitor, it too boasts a curved shape—but oriented in a different direction. The G Flex curves from the middle, banana-like, so that the top and bottom of the phone are elevated when the device is lying face-up. The G Flex's curve is also slightly more pronounced than that of the Galaxy Round, with a curvature radius of 500 mm.

More significantly, the G Flex is also bendable. LG claims that, during testing, it repeatedly applied up to 88 lbs. of pressure to the back panel, causing the unit to flex without breaking—and without damaging the display's functionality. Combined with a "self-healing" coating applied to the back panel that apparently was sourced from the automotive industry, LG appears to have made important strides toward ruggedizing the G Flex.

Further distinguishing the G Flex from the Galaxy Round is its use of a curved battery that is produced via the stack-and-folding method. According to IHS Research, the futuristic battery, on which LG Chem Ltd. holds a patent, allows for the realization of a curved battery form factor that is better able to withstand the physical stresses associated with repeated charging and discharging.

G Flex's P-OLED HD display measures 6" on the diagonal with a resolution of 720 x 1280 pixels at a density of 245 pixels per inch. Unlike the Galaxy Round, G Flex's display uses an RGB vertical stripe sub-pixel arrangement.

A teardown by IHS estimates the display module price at US$70.

A bulkier unit than the Galaxy Round, the G Flex weighs in at 177 grams. 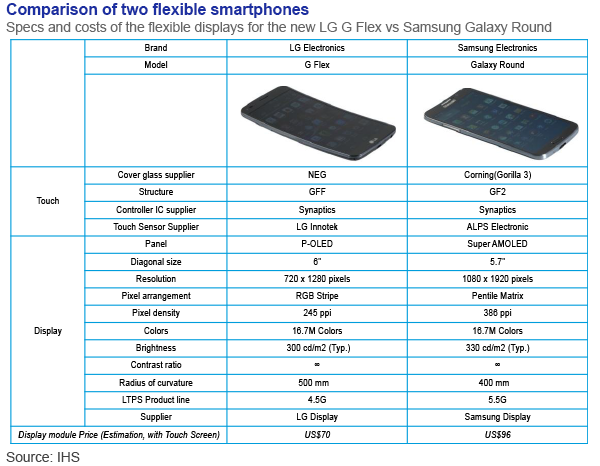 "One of the biggest challenges in this market is high cost due to lower manufacturing yield rates," Dash said. "The production cost has to be reduced and the process and materials have to be improved. We think it may take another one or two years before we see truly flexible products at reduced costs."

IHS estimates that the demand for flexible displays will grow by over 300 percent in 2014 compared to 2013, with sales reaching nearly $100 million. Moreover, demand for flexible displays is projected to undergo massive growth through the end of the decade, with applications across a broad range of products—from smartphones with displays that curve around the sides, to smart watches with wraparound screens, to tablets and PCs with roll-out displays, to giant video advertisements on curved building walls—driving growth in shipments to almost 800 million units by 2020 and market revenues to $41.3 billion.