Micron Set to Jump in Chip Rankings as Market Rebounds

U.S. memory chip vendor Micron Technology Inc. will catapult to fourth place in semiconductor sales in 2013, up from 10th place in 2012, based on its acquisition of Japan's Elpida Memory Inc. and a rebound in the memory sector that is expected to lift the overall semiconductor market, according to preliminary estimates from IHS.

Micron is on track to post chip sales of $14.2 billion in 2013, more than doubling its $6.8 billion total in 2012, IHS said. The company's projected109 percent revenue growth this year is expected to be the highest growth rate for any of the more than 150 chip companies tracked by IHS this year.

Overall chip sales are projected to increase by 4.9 percent in 2013 following a 2.5 percent decline in 2012, IHS said. Chip sales are forecast to reach $317.9 billion, up from $302.9 billion in 2012, according to preliminary estimates from Semiconductor Value Chain Service at IHS.

The rebound in the chip market this year is attributed almost exclusively to a strong expansion of DRAM and NAND flash memory. DRAM sales are projected to rise by 35 percent this year, while NAND sales are expected to rise by 27.7 percent, according to IHS.

"Memory chips are coming to the rescue of the semiconductor business in 2013," said Dale Ford, head of electronics and semiconductor research at IHS. "Solid pricing and expanding demand for DRAM and NAND in smartphones and tablets have caused revenue for these memory devices to surge. Without these two high-performing product segments, the semiconductor industry would attain zero growth this year."

The memory boom is also benefitting other memory chip suppliers. For example, South Korea's SK Hynix is on track to increase sales by 48.7 percent in 2013, catapulting it to No. 5 in chip sales rankings, up from No. 7 in 2012, IHS said. IHS noted that SK Hynix’s performance is all the more notable since it was entirely driven by organic sales growth—and not by any acquisitions. 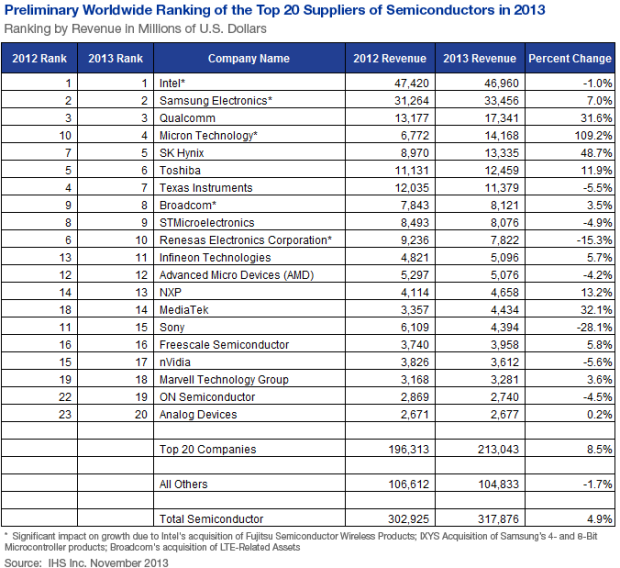 Qualcomm Inc. is also on track to turn in another strong year, IHS noted. The company is set to grow chip sales by 31.6 percent in 2013 and is projected to account for 5.5 percent of the overall chip market, IHS said. No. 3-ranked Qualcomm’s strong growth in 2013 will allow it to narrow its market share gap with industry leaders Intel Corp. and Samsung Electronics Co. Ltd., IHS said.

On the flip side of the coin, Sony, Renesas Electronics, and Rohm Semiconductor are set to deliver disappointing results this year, with expected declines of 28.1 percent, 15.3 percent and 14.3 percent, respectively, IHS said. As a result, Renesas will drop all the way to No. 10, down from No. 6 in 2012, and Sony will fall to No. 15, declining from No. 11. Rohm Semiconductor will completely fall out of the ranks of the Top 20, the company said.

Texas Instruments and Nvida also are struggling in 2013 with the companies suffering declines of 5.5 percent and 5.6 percent, respectively, according to IHS.

Intel, which has been No. 1 in chip sales for more than two decades, will retain the top spot in 2013. But IHS said Intel's projected revenue decline of 1 percent this year means it will drop from its historically high 15.7 percent share of the market in 2012 to 14.8 percent in 2013.

Of the major application markets for semiconductors, the wireless segment will drive the largest increase in semiconductor consumption of chips in 2013, IHS said. Semiconductor revenue from wireless communications products are projected to grow by 11.7 percent in 2013, according to the firm.

Overall, 53 percent of the more than150 companies tracked by IHS are expected to expand their semiconductor revenue in 2013, while 47 percent will decline.