Conventional wisdom says it’s cheaper to produce things in Asia than in North America, which is why U.S. electronics brands have steadily outsourced nearly all their product manufacturing to companies based in the Far East during the last few decades.

However, with just one product—the Moto X—Motorola may have overturned this truism, building a smartphone assembled in the United States but with a combined bill of materials (BOM) and manufacturing cost in the same range as market-leading products made in Asia. Motorola has also delivered a smartphone that merges state-of-the-art hardware with differentiated features. Yet the phone is priced affordably enough to attract wireless operators interested in offering a cheaper alternative to the leading models now on the market.

The total BOM of the Moto X totals about $214, according to preliminary results of a dissection conducted by the IHS Teardown Analysis Service team. When the $12 manufacturing expense is added in, the cost to produce the Moto X increases to just under $226. See the table below. 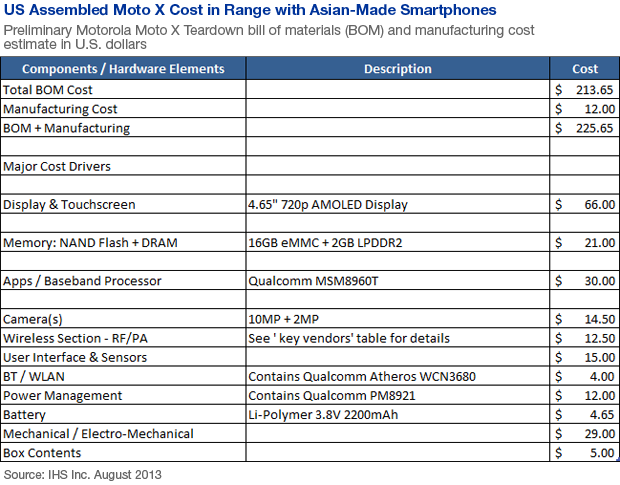 While the manufacturing expense of the Moto X is $3.50 to $4.00 more than these phones, the total cost to make Motorola’s smartphone is only 9 percent more than the iPhone 5—and about 5 percent less than the Galaxy S4.

“With the Moto X, Motorola is reaping the public-relations and customization upsides of producing a smartphone in the United States, while maintaining competitive hardware costs,” said Andrew Rassweiler, senior director, cost benchmarking services for IHS. “The Moto X’s electronic components are comparable to other cutting-edge smartphones on the market today. However, the product doesn’t break much new ground in terms of its hardware. Furthermore, in spite of its ‘Made in the USA’ label, overall costs are still competitive with similar smartphones. Our initial estimate suggests the additional costs of onshoring the Moto X are relatively low.”

The table below presents the preliminary BOM based on a physical dissection of the Moto X conducted by the IHS Teardown Analysis Service. Note that the teardown assessment is preliminary in nature, accounts only for hardware and manufacturing costs and does not include other expenses such as software, licensing, royalties or other expenditures.

Made in the USA—and priced to sell

“Motorola has been generating a great deal of publicity regarding the Moto X’s production in Texas,” said Wayne Lam, senior analyst for wireless communications at IHS. “However, beyond the public relations boon, the domestic manufacturing allows Motorola to rapidly assemble custom versions of the phone for customers in the United States. Motorola can deliver a customized Moto X to AT&T wireless subscribers in just four days.”

The 16Gbyte Moto X has a full retail price of $540 or $580 when customized with Motorola’s Moto Maker purchase and design service. With a two-year service contract from AT&T, consumers can obtain a Moto X for $199.

“An examination of the retail and contract pricing indicates that Motorola receives carrier subsidies of slightly more than $300 per handset when purchased on contract, whereas Apple’s iPhone and the Samsung Galaxy S4 command larger subsidies of more than $400 per contract,” Lam noted. “Therefore, Motorola is definitely vying to become the lower-cost alternative to Apple and Samsung for the wireless carrier partners.”

On the beaten path

“One of the most remarkable things about the electronic design of the U.S.-made Moto X is how unremarkable it is compared to Asian-assembled smartphones,” Rassweiler said. “IHS Teardown has already seen almost all of the components in Moto X in other products. With its use of a Qualcomm-based design, the Moto X could easily be mistaken for a smartphone made by HTC or Samsung, if it weren’t for the Motorola logo. The use of components that are already shipping in high volume allows Motorola to keep costs down.”

The Moto X is based on a Qualcomm turnkey design and makes maximum use of the supplier’s semiconductors. Qualcomm-made chips in the Moto X include the MSM8960 apps/baseband processor; the WTR1605L radio frequency (RF) transceiver; the WCD9310 audio codec; the PM8921 power management integrated circuit (IC); and the WCN3680 Bluetooth, frequency modulation and wireless local area network companion IC.

While most of the design was familiar, this was the first time that the WCN3680 was seen in a product torn down by IHS. This device supports the 802.11ac WLAN standard, which is in the initial acceptance stage, but soon will become the standard in smartphones.

The table below shows the major components and suppliers in the Moto X. 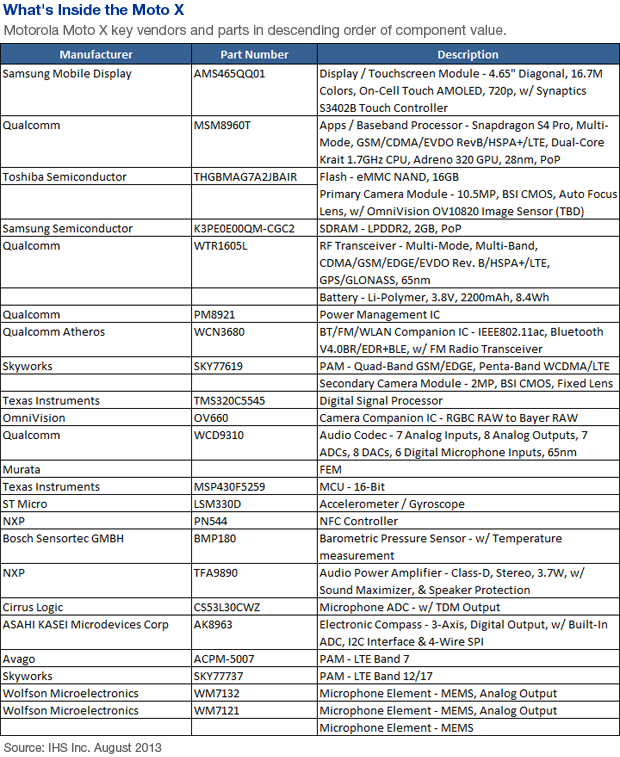 The MSM8960 Snapdragon S4 Pro Apps Processor appears to be a variant of the same part that has appeared in other devices, including the HTC One X, the Blackberry Z10 and the North American version of the Galaxy S III.

At the same time, Motorola is promoting its X8 Mobile Computing System.

Company marketing materials strongly suggest, based upon a visual examination of a Motorola-labeled integrated circuit and other observations, that its X8 Mobile Computing System is a system-on-chip (SoC) solution from Motorola featuring eight cores.

Upon further inspection, the X8 is not an SoC, and is not a Motorola chip. Rather, the X8 Mobile Computing System is a design architecture that spreads the eight cores across at least two integrated circuits—including the Qualcomm MSM8960 and a Texas Instruments digital signal processor/microcontroller.

The Moto X also uses microelectromechanical systems (MEMS) microphones from Wolfson Microphones, marking the first time that IHS has seen these parts from this supplier in any product. Wolfson’s forte in the past was audio codec chips.

The Moto X makes very efficient use of its battery by managing the power consumption of its apps processor and display.

Instead of taxing the apps processor for simple tasks like displaying notifications, the Moto X employs a secondary low-power contextual core to run the display when the phone is powered off. The Moto X’s active-matrix organic light-emitting diode (AMOLED) display only lights up small portions of the 4.7-inch screen to display time and notifications like email, text and missed calls, extending the battery life to a 24-hour usable experience.

As with all AMOLED displays, each pixel illuminates and thus is inherently more energy efficient than LCDs, where the entire panel is illuminated.

On the ergonomics front, the smartphone employs a 4.7-inch display with minimum bevels and a rounded/curved backside with an indented index finger rest. While not the largest display available on a smartphone, it makes the Moto X easier to hold and use.

In terms of user experience, the Moto X is the first smartphone to include an "always-on/listening" or "open-mic" front end. The always-on/listening system is trained to listen for magic commands from the owner's voice to activate Google Now interactions.