A glut of large-sized liquid-crystal display (LCD) panels used in the television and information technology (IT) sectors arose at the end of the first half this year as production consistently outpaced shipments.

A total of 47.7 million square meters (msqm) of LCD panels for use in televisions and public information displays were produced globally during the first six months of the year, according to data compiled by IHS. In comparison, shipments amounted to only 46.8 msqm. This meant that production for TV panels exceeded shipments by 2.0 percent. 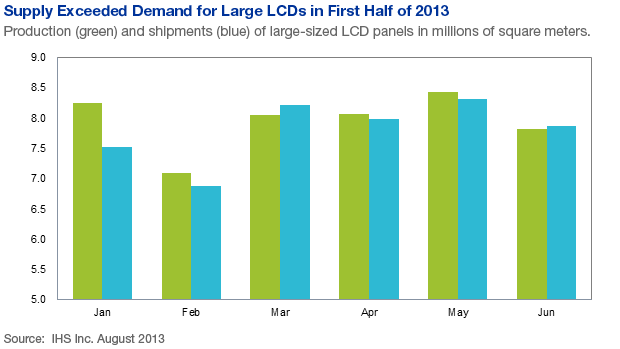 Meanwhile, 18.4 msqm of LCD panels were produced during the same period for monitors, notebook computers and tablets comprising the IT sector. Shipments also came out lower at 18.0 msqm—similar to what occurred in the TV sector—so that IT panel production exceeded shipments by 2.6 percent.

“The large-sized LCD panel market in the first half of 2013 suffered from slow demand, primarily driven by an underperformance of sales in China, the world’s biggest LCD TV market,” said Ricky Park, senior manager for large-area displays at IHS. “In all, TV set makers proved unable to generate growth during the first half despite a slew of holidays—including the Lunar New Year and Labor Day—plus last-minute promos put up just before the end of the Chinese government’s subsidy program in May to encourage new consumer purchases.”

The same lackluster demand was in evidence for panels in the IT sector, where consumers and businesses alike showed little enthusiasm for buying new monitors or laptop PCs. Instead, devices like smartphones and tablets were the preferred items of purchase, selected for their appeal and ease of use, Park noted.

Given the slow demand, panel makers reduced utilization rates for their fabs to 79 percent during the first half—5 percent lower than the average recorded during the second half of 2012. Still, the deliberate curtailment in fab utilization was not enough to prevent an increase in accrued panel inventory. Accumulated stockpiles for TV panels amounted to 8.7 msqm, up 12 percent from the second half last year. For IT panels, the figure was 2.9 million msqm, an increase of 19 percent.

The slow demand and high inventory of the first half resulted in a price drop for panels during that time frame. The open-cell price of 32-inch high-definition, 60-hertz TV panels fell by 7.5 percent, while that for IT panels was down approximately 4 percent.

“The current excessive inventory levels portend badly for the rest of the year,” said Alex Kang, senior analyst for large-area displays at IHS. “Production is projected to exceed shipments again in the third quarter, and the second half overall is forecast to be negatively affected by the inventory overhang from the first half of the year.”