The European Union’s antidumping tariffs are spurring an increase in prices for Chinese solar modules, marking the end of a period when available inexpensive photovoltaic (PV) devices enabled fast growth of installations in the region.

After declining for 48 months since the first quarter of 2009, with a seasonal uptick in February 2013, average pricing for Chinese crystal polysilicon modules in Europe rose by 4 percent in June to 0.54 euros, up from 0.52 euros in May, according to a new report from IHS. Pricing is expected to continue climbing in July and then again in September, with the average increasing to 0.55 euros by the end of that month.

The figure below shows the IHS forecast of average European pricing in euros for Chinese-made crystal polysilicon modules that have cleared antidumping duties. 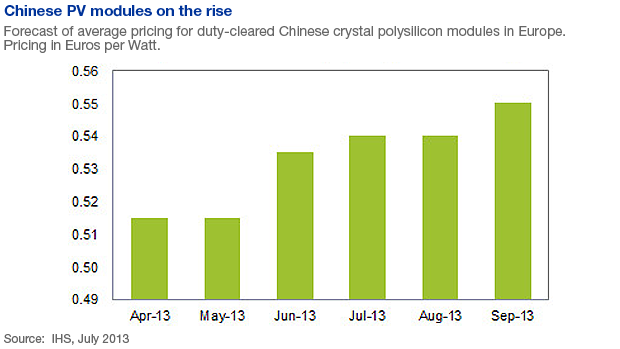 “With the plan to reduce government subsidies in Germany starting in April 2012, low-cost PV modules from China took over as the engine of growth in the European solar market, enabling the continued expansion of installations,” said Dr. Henning Wicht, senior director of solar research for IHS.

“However, the era of low-cost Chinese modules is now over, as prices have risen due to the EU Commission’s implementation of preliminary antidumping tariffs. This will have a negative impact on solar installations, and is likely to cause many companies engaged in the engineering, procurement and construction (EPC) of solar systems to go out of business this year.”

The EU Commission imposed the tariffs on June 5. The duties of 11.8 percent correspond to a net value of 0.05 to 0.055 euros per watt. This additional cost has translated directly into an increase in prices for buyers.

Prices now are rising again partly because of the closing of a loophole that allowed them to bypass the tariff. Some Chinese suppliers in May and early June used Croatia’s transition from a non-EU to an EU member state, and declared modules shipped to Croatia before July 1 as duty-cleared goods. However, this circumvention is no longer available.

The major factor determining module pricing in Europe in the third quarter is whether officials from the European Union and China will agree on the future trade of solar modules. As of July 15, it wasn’t clear that both parties could come to an agreement before the August 5 deadline.

As a result, average tariffs on imported Chinese solar modules could rise on average by 47.6 percent during the period from August 5 through December.

“If the 47.6 percent tariff goes into effect, global supply lines and pricing for solar modules will be shaken up dramatically,” said Glenn Gu, senior PV analyst at IHS.

“Chinese suppliers initially will suspend almost all shipments to Europe. In order to continue serving the European market, they then will try to shift production capacity to locations outside of China by using overseas branches or via agreements with non-Chinese module makers. But even if they succeed in this, the supply disruption is likely to cause module prices to increase by 12 to 20 percent during the following months.”

The inventory of duty-cleared Chinese modules that has already been shipped to Europe is likely to be sold off as the region enters a state of shortage.

High-end pricing for modules that have already cleared the duty in Europe is forecast to amount to 0.60 to 0.65 euros per watt. These are modules that are subjected to an 11.8 percent anti-dumping duty and are not exposed to the duty due to clearance completed prior to June 6.

Such a level of pricing makes high-quality modules from South Korean and Western suppliers more competitive with Chinese-made products. Because of this, European module buyers are likely to switch to these alternative sources.

On the global scale, the price increase in Europe has been compensated by declining prices in Japan.

“Chinese modules sold to Japan dropped below $0.70 per watt on average in June 2013, the first time in history they have been at such low levels,” Gu noted. “Chinese suppliers are competing furiously and driving prices down in Japan, despite restrictive regulations on imports and quality.