The instrument’s frequency range from 400 MHz to 8 GHz covers not just all 5G FR1 requirements, but also the extension to unlicensed frequency bands in the U.S. to 7.125 GHz. The 500 MHz maximum signal bandwidth far exceeds the 5G FR1 maximum of 100 MHz, supporting out of band and adjacent channel leakage ratio (ACLR) measurements.

For maximum test throughput, two independent signal generators and analyzers enable fast parallel measurements; the twin channels each support eight parallel full-duplex test ports. For each channel, the output test signal can be broadcast to all eight ports. For input, ports are fast-switched in less than 10 microseconds for sequential analysis of either parallel or multiport devices. Transmitter and receiver tests can be carried out in parallel; the R&S PVT360A optimizes test sequences to minimize any idle time between result processing. With the second channel installed, users can run true multiple-input/multiple-output (MIMO) 2x2 tests with the signal paths tested in parallel, not sequentially. The optional smart channel mode divides the R&S PVT360A in up to eight separate virtual instruments, each with independent output signals and input measurements. The generator and analyzer are shared across the virtual instruments, with optimized resource scheduling for all calculations and processing. 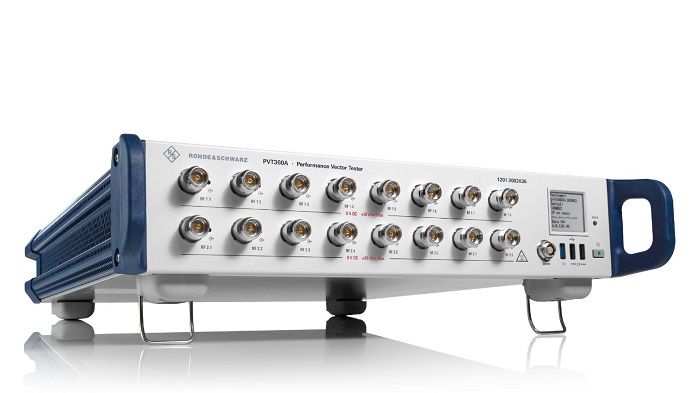 To cover the full range of requirements in the extremely price-sensitive market for production test with a single instrument, the R&S PVT360A option concept supports setups from a single generator and analyzer with eight test ports for frequencies from 400 MHz to 6 GHz and a bandwidth of 250 MHz, up to the complete twin channel configuration each with the full frequency and bandwidth ranges of 8 GHz and 500 MHz. All updates are by keycode, and can be installed instantly.