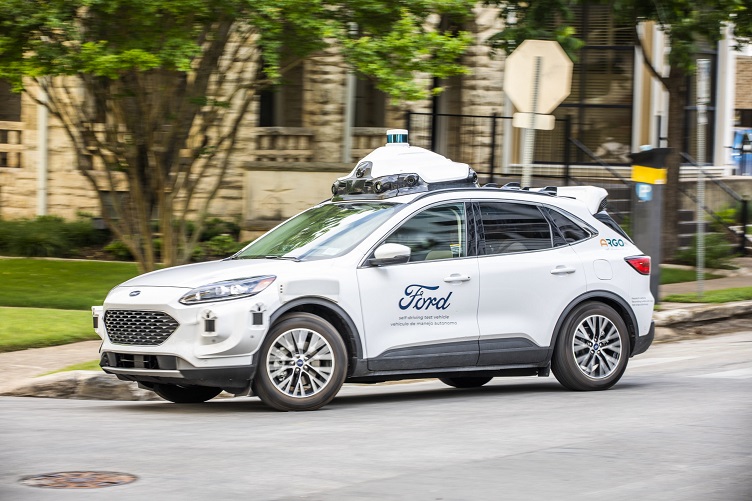 Argo AI previously was testing systems for robotaxis with support from both Ford and Volkswagen. Now the company will be shutting down after both companies pulled the plug. Source: Argo AI

The news comes as Ford said it made a strategic decision to shift its capital spending from Level 4 advanced driver assistance systems (ADAS) being developed by Argo AI to internally developed L2+/L3 autonomous driving technology.

Ford admitted that Argo AI has been unable to attract new investors and that it will take a loss of $827 million after Ford recorded a $2.7 billion non-cash, pretax impairment on its investment in Argo AI.

In 2017, Ford said it would invest $1 billion over the next five years in Argo AI to develop a virtual driver system for Ford’s future vehicles. Later in 2020, VW made an agreement with Ford to develop electric vehicles as well as work with Argo AI on autonomous driving technology. VW also would invest in Argo as part of the agreement.

In a statement, Argo AI confirmed that it would be shutting down and that many of the Argo employees will have an opportunity to continue work on automated driving technology at either Ford or VW. However, others will not, the Argo AI statement said.

Ford said that when it initially invested in Argo AI in 2017 it was expected to have Level 4 ADAS technology commercially by 2021.

“But things have changed, and there's a huge opportunity right now for Ford to give time – the most valuable commodity in modern life – back to millions of customers while they’re in their vehicles,” said Jim Farley, president and CEO of Ford during the Q3 announcement. “It’s mission-critical for Ford to develop great and differentiated L2+ and L3 applications that at the same time make transportation even safer.”

Farley said while it is optimistic about Level 4 ADAS and fully autonomous vehicles, it is a long way off and Ford does not have to create the technology by itself.

Additionally, L2+/L3 systems already give customers benefits and will help Ford to expand revenue and profit possibilities, the company said. By 2028, Ford expects to have more than 30 million connected vehicles on the road globally with L2+/L3 technology integrated.

This indeed is a blow to the autonomous vehicle market as Ford admitted that the technology is quite a few years off. While numerous vendors are heating up their pilot projects for autonomous driving —including expanded programs by Waymo, Cruise, Baidu and Pony.ai — it is clear others are still skeptical of when it will be viable.

Furthermore, Ford noting that it does not need to accomplish autonomous driving technology by itself is an interesting tidbit and will make those developing self-driving systems and system-on-chips — such as Nvidia, Intel and Qualcomm — happy.