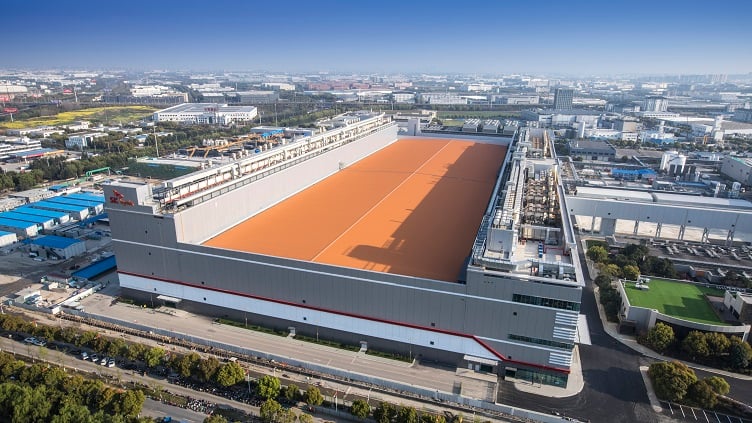 SK Hynix and Samsung Electronics may pull out of its facilities in China due to the export control rules set in place by the U.S. SK Hynix produces about 12% of the world’s DRAM from its Wuxi, China location pictured here. Source: SK Hynix

The impact of the Chinese export bans on semiconductors and semiconductor equipment is growing as reports have emerged that companies are now considering leaving the country entirely due to the inability to get the parts they need.

Additionally, some American executives working for Chinese firms are stuck in limbo under the export control rules that are prohibiting U.S. citizens from helping support China’s chip development, the Wall Street Journal reported.

Apparently, at least 43 senior executives that are working with 16 publicly listed Chinese chip firms are American citizens and are seeking to help these companies develop new chips to catch up with American semiconductor manufacturing. The export restrictions prohibit these executives from helping Chinese firms, leaving them in a position where they are treading water, the Wall Street Journal said.

Since the new rules were placed on American workers in China on Oct. 12, a wave of mass withdrawals of workers including resignations of management personnel has happened, IDTechEx said. This includes American employees at firms including:

According to the Financial Times, 200 people with U.S. passports are employed by Chinese semiconductor organizations. At this time, it is unknown if they are leaving the country or waiting for more information.

Meanwhile, semiconductor giants Samsung Electronics and SK Hynix are considering abandoning their chipmaking facilities in China despite getting a one-year exemption from the U.S. Department of Commerce (USDOC) that will allow them to receive semiconductor equipment for their factories in the country.

IDTechEx said that Applied Materials, KLA Corp. and Lam Research have stopped corresponding services and support in China and have withdrawn their U.S. workers from China.

According to The Korea Herald, the Korean chipmakers may have no choice but to relocate these fabs, which are used mostly for memory chips, due to the lack of the ability to import chipmaking equipment for the fabs in China. This inability to secure the latest technology would hinder the companies from keeping pace with other vendors producing similar memory semiconductors.

A modern-day arms race for semiconductors has emerged as the U.S. continues to restrict exports of technology to China to quell the country’s advancement in the chip space. Previously, the USDOC placed restrictions on wide band gap chips, electronic computer-aided design (ECAD) software and pressure gain combustion (PGC) technology in September.

Prior to that, the U.S. government placed restrictions on semiconductor equipment that can be used to fabricate chips at the 10 nm or better manufacturing processes. This comes after the government placed Huawei and Semiconductor Manufacturing International Corp. (SMIC), China’s largest foundries, on the export restriction list making it nearly impossible for U.S.-based companies to do business with these Chinese vendors.

The U.S. has been in contact with multiple equipment vendors, including extreme ultraviolet (EUV) lithography maker ASML, to restrict sales of the equipment to Chinese semiconductor manufacturers.

If sales of this type of equipment become restricted to China, it will likely hinder development of China’s chipmaking industry.