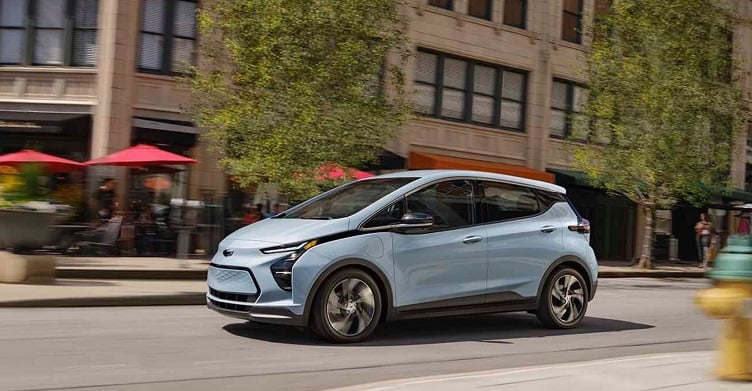 Chevy Bolt will be one of many vehicles that Hertz will be buying over the next five years to expand its fleet of EVs for rent. Source: General Motors

General Motors Co. and car rental giant Hertz have signed an agreement where Hertz will order up to 175,000 Chevrolet, Buick, GMC, Cadillac and BrightDrop electric vehicles (EVs) over the next five years.

The companies claim this is the largest expansion of EVs among fleet customers as it spans a wide range of vehicle categories and price points, including compact and midsize SUVs, pickup trucks, luxury vehicles and cargo delivery trucks.

Deliveries of EVs will last through 2027 as Hertz widens its EV fleet and GM accelerates production of EVs broadly into many categories.

Hertz said it will begin taking delivery of Chevrolet Bolt EVs and Bolt EUVs in the first quarter of 2023 with deliveries expected to increase as GM scales production between 2023 and 2025, driven by the opening of new Ultium battery cell plants in Ohio, Tennessee and Michigan.

GM plans to be able to produce 1 million EVs in North America by 2025.

In 2021, GM said as part of its plans to become carbon neutral by 2040, it would phase out gas and diesel vehicles from its fleet by 2035. At the time, it was the largest move to come in the automotive transition to electrification. A few weeks later, another U.S. automotive giant, Ford, would announce a similar plan.

Since its announced it would shift to electrification-only vehicles over the next decade, GM has upped its investment in EV production, battery factories and new EV charging stations that will be needed for the market to shift to EVs. Additionally, GM introduced a new charging service called Ultium Charge 360 that will support both private and public charging across more than 60,000 charging points in the U.S.

With these 175,000 EVs, Hertz said its customers could travel more than 8 billion miles, saving about 1.8 million metric tons of carbon dioxide compared to gasoline-powered vehicles traveling a similar distance.

The agreement follows a deal Hertz made in 2021 to add 50,000 Tesla EVs to its U.S. fleet by 2023. At the time, it was considered one of the largest expansions of EVs on a mobility platform in North America. This deal surpasses that amount by more than three times.

However, Hertz said at the time that if the program is successful, the program could expand to 150,000 Teslas over the next three years. Hertz also said it would expand its new EV charging infrastructure across Hertz’s global operations.

"Our work with Hertz is a huge step forward for emissions reduction and EV adoption that will help create thousands of new EV customers for GM," said Mary Barra, GM Chair and CEO. "With the vehicle choice, technology and driving range we're delivering, I'm confident that each rental experience will further increase purchase consideration for our products and drive growth for our company."

In total, Hertz said it wants to create the largest rental fleet of EVs in North America with these cars available for rent at 500 Hertz locations in 38 states. The company wants one-quarter of its fleet to be electric by the end of 2024.