Airborne weapons experts at the Boeing Co. are building add-on kits to create flying torpedoes that can enable U.S. Navy aircraft to attack submerged enemy submarines from long ranges and from high altitudes. 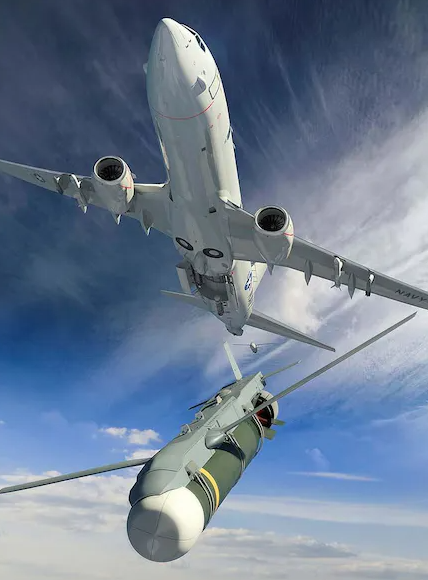 The HAAWC ALA enables the Raytheon MK 54 lightweight torpedo carried aboard the Navy Boeing P-8A Poseidon long-range maritime patrol jet to glide through the air from altitudes as high as 30,000 ft, essentially transforming the torpedo into a glide weapon that the P-8A aircraft can release from high altitudes.

As the flying torpedo for anti-submarine warfare (ASW) nears the water, it jettisons its wings and tail and takes on its original role as a smart torpedo that can detect, track and attack enemy submarines autonomously. This contract has options that could increase its value to $121.4 million.

After shedding its control surfaces, the HAAWC ALA activates a parachute that lowers the torpedo into the water to begin its run toward the target. When launched from 30,000 ft the HAAWC-equipped MK 54 torpedo will glide for seven to 10 minutes before entering the water.

While in flight the HAAWC is completely self-contained. The ALA includes a flight control computer, a GPS-based navigation system, and power sources. When near the water, the system sheds its wings and activates a parachute that lowers the torpedo to the water to begin its run toward the target.

The MK 54 always has been launchable from aircraft, but before the HAAWC ALA, crews of anti-submarine fixed-wing aircraft and helicopters had to release the torpedo from altitudes no higher than about 100 ft.

The HAAWC will enable the P-8A aircraft — a modified Boeing 737-800ERX passenger jetliner — to maintain optimum surveillance altitudes without wasting time and fuel to drop to low altitudes and then back to high patrol altitudes.

Attacking from high altitudes also enables the P-8A to reduce the time between target acquisition and attack, as well as to launch anti-submarine weapons outside the ranges of shore-based anti-aircraft defenses.

The Mk 54 is an all-digital lightweight torpedo that has advanced software algorithms developed originally for the larger submarine-launched Mark 48 torpedo.

The Boeing HAAWC ALA for the MK 54 torpedo consists of wings designed originally for the Boeing AGM-84H/K Standoff Land Attack Missile-Expanded Response (SLAM-ER). The ALA tail assembly includes the guidance kit designed originally for the Joint Direct-Attack Munition (JDAM), which contains a GPS navigation system. Boeing also is fitting the HAAWC with a data link to transmit target position updates while in flight.