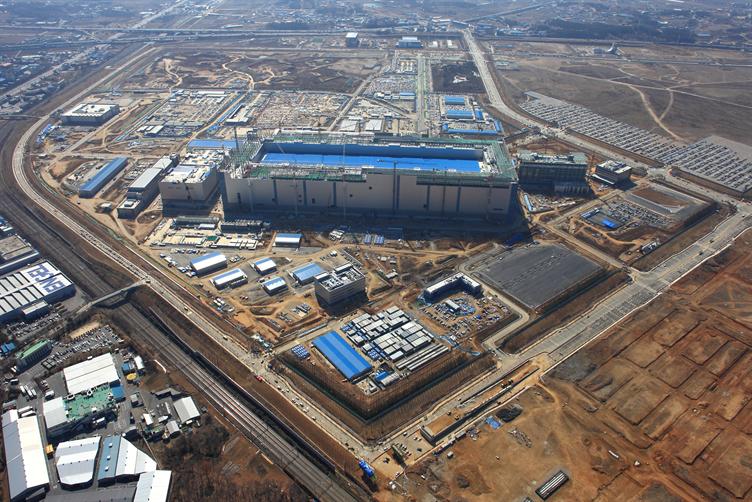 Samsung’s Pyeongtaek campus pictured under construction here is one of the largest semiconductor fabs in the world and is expected to produce 3nm chips sometime this year. Source: Samsung

Samsung Electronics Co. is said to be close to announcing the mass production of its 3 nanometer (nm) semiconductors, a move that would put it on par with rival Taiwan Semiconductor Manufacturing Co. (TSMC).

According to Business Standard, Samsung showcased its 3 nm semiconductors to President Joe Biden last month during a visit to Samsung’s Pyeongtaek complex, billed as one of the largest semiconductor fabs in the world.

At the 3 nm process technology node, semiconductors will be built on gate-all-around (GAA) technology. Chips will allow up to 45% area reduction while providing 30% higher performance and 50% lower power consumption compared to existing FinFET processes, Samsung said.

TSMC, the largest foundry and largest semiconductor vendor in the world, plans to begin mass production of 3 nm node semiconductors in the second half of this year.

If the report from Samsung is correct, it has become a manufacturing race to see who produces the first 3 nm chips.

Samsung is one of the largest chipmakers and foundries in the world, having ramped up its manufacturing over the past decade to meet demand and become a competitor in the foundry space. Last year, Samsung laid plans to triple its foundry production capacity by 2026 to meet expected semiconductor demand, which will rise 5% over the next decade.

According to TrendForce, TSMC held nearly 54% of the global foundry revenue while Samsung had 16.3% of foundry revenue. Any advantage that Samsung can get on TSMC would help improve its foundry position as it races to fend off advancement from Intel Corp. in the foundry space.

Intel Foundry Services (IFS) was created in March of 2021 to provide chip manufacturing capabilities for fabless companies in Europe and the U.S. Earlier this year, Intel bolstered its foundry ambitions with the planned acquisition of Tower Semiconductor for $5.4 billion. It also formed a dedicated automotive group for IFS to develop complete solutions for the automotive industry that has been one of the hardest hit sectors of the ongoing chip shortage.