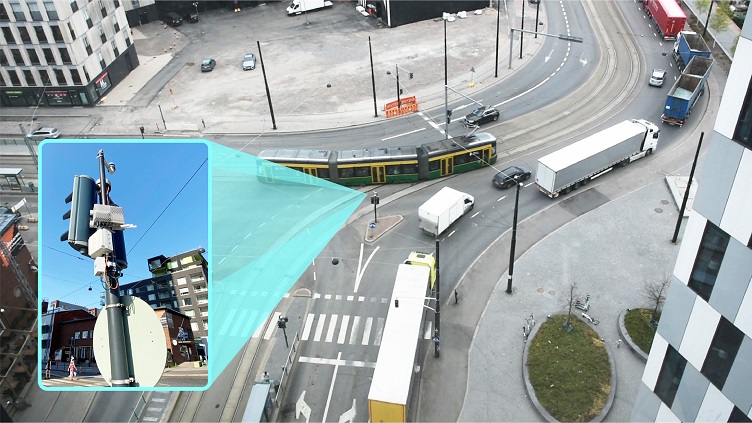 The lidar in the Helsinki project was combined with AI software to monitor traffic flow at three intersections. Source: Velodyne

Velodyne has deployed its lidar in Helsinki, Finland, in a new project to collect traffic data and improve roadway safety.

Velodyne’s intelligence infrastructure solution (IIS) is being used in collaboration with the Forum Virum Helsinki and the City of Helsinki. The solution combines Velodyne’s lidar sensors and Bluecity’s artificial intelligence software to monitor traffic flow at three intersections in the Jätkäsaari section of the city.

One intersection was equipped with a cooperative intelligent transport system roadside unit that sent along warning message to drivers on vulnerable road users at the intersection. The system delivered an average counting accuracy of 97% for vehicle traffic as well as bicycle and pedestrian traffic.

The IIS also demonstrated efficacy in detecting near miss collision situations such as running red lights and jaywalking.

The next steps will include further developing vehicle classification capabilities and building a solution for mobile use for short-term traffic measurement and creating an interface between IIS and traffic signal controllers.

The company last year began what it claims was the largest traffic monitoring trial at the University of California, Irvine where 25 intersections were equipped with lidar systems.

The lidar sensors do not identify facial characteristics and does not record details but simultaneously collect data on traffic and congestion in any lighting or weather condition.