54% of semiconductors were manufactured by US companies in 2021

Propelled by an increase in sales from integrated device manufacturers (IDMs) and fabless chip companies, the U.S. captured 54% of the total worldwide semiconductor market in 2021, according to new data from IC Insights.

After the U.S., South Korean companies were second in overall IC sales last year with 22% market share, followed by Taiwanese companies, on the strength of their fabless company IC sales, holding 9% of global IC sales, compared to a 6% share held by European and Japanese suppliers. Chinese vendors only captured 4% of the total market in 2021. 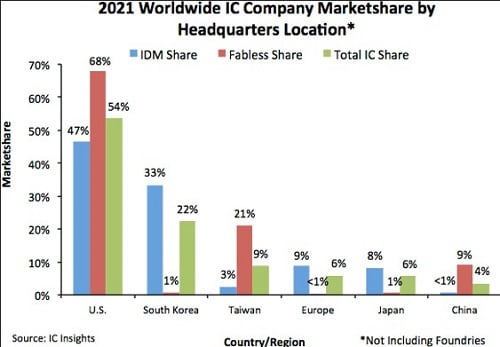 It is a striking contrast as the companies that manufacture the most semiconductors — those in Taiwan and Korea — do not sell as many chips as the U.S., which manufactures far less.

The U.S. government has proposed the Creating Helpful Incentives to Produce Semiconductors (CHIPS) for America Act HR 7178, which would provide more than $52 billion to invest in domestic U.S. chip manufacturing and research. The bipartisan act aims to enhance the competitiveness of the U.S. by promoting American science and technology leadership.

Both the Senate and the House have passed versions of the CHIPS Act, but differ on specific provisions. Recently, the Senate approved the bill again, which will send the legislation back to the House of Representatives to launch a formal process to seek a compromised version of both houses of Congress. Once the compromised version is complete, it would be sent to President Joe Biden to sign it into law.

Weak in many areas

Japanese companies’ IC sales market share continued to fall in the beginning on the 1990s, where it held nearly half of the worldwide IC market share. Over the past 30 years it has dropped to only 6% in 2021.

European companies have not seen such a stark decline as it held only 9% of the global IC market share in 1990, but it has declined to 6% in 2021.

In contrast, the U.S. and Asian IC suppliers have seen their shares climb since 1990.