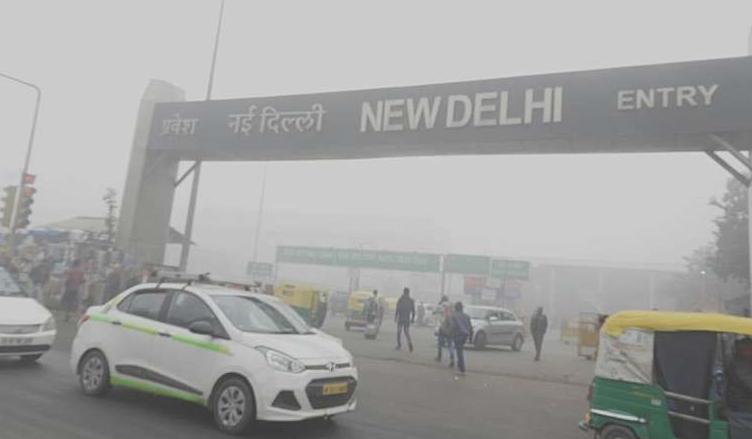 Air pollution is pervasive in the Indian capital, and emissions from fuel-burning vehicles pose a serious threat to both healthy people and those with respiratory conditions. Source: Sumita Roy Dutta / Creative Commons

With 31 million residents, New Delhi is one of the most densely populated cities in the world, and one of the most polluted. A new UCLA-led study shows the positive impact on air quality that is possible by replacing traditional fuel-burning rideshare vehicles with battery-powered electric vehicles (EVs). The researchers found that this transition would quickly result in economic benefits as well.

Rideshare services and taxis are popular transportation modes in the country where few residents (only about 3.5%) own personal cars. These services have become a major source of tailpipe pollution, including harmful particulates, nitric oxides and carbon monoxide.

According to the study’s comprehensive framework for electrifying a ride-share fleet, 23,000 EVs and a network of 3,000 50 kilowatt chargers would be enough to address New Delhi’s total rideshare demand. The initial investment would be recouped in less than two years, mainly from fuel expenditure savings. Other costs factored in are the value of the land for charging stations, government subsidies for the purchase of an EV, and the price of fuel per kilometer.

The savings come far quicker than with efforts focused on EV use among private households because rideshare vehicles get three to four times as much use as private vehicles. “[Rideshare vehicles] are driving a lot and burning a lot of fuel," said lead author Deepak Rajagopal, an assistant professor at the UCLA Institute of the Environment and Sustainability.

A mandate for zero-emission vehicles for rideshare services

The researchers gathered data from Uber and India-based Ola, which combined make up about half of all ride-share service in New Delhi. They analyzed two years of rideshare trips, including pickups, drop offs and wait times over 15 million kilometers of travel. Electrifying the entire rideshare fleet would significantly reduce the biggest pollutant threats — tailpipe nitric oxide emissions and particulate emissions. The switch could cut approximately 180 metric tons of the former and 0.14 metric tons of the latter.

"Zero-emission targets for commercial vehicle fleets are not only realistic but economically and environmentally sound for polluted cities worldwide," he said. "These findings can help others considering such a transition thoroughly understand the infrastructure needs, the private and public costs and benefits, and the improvement to air quality that comes with electrification."