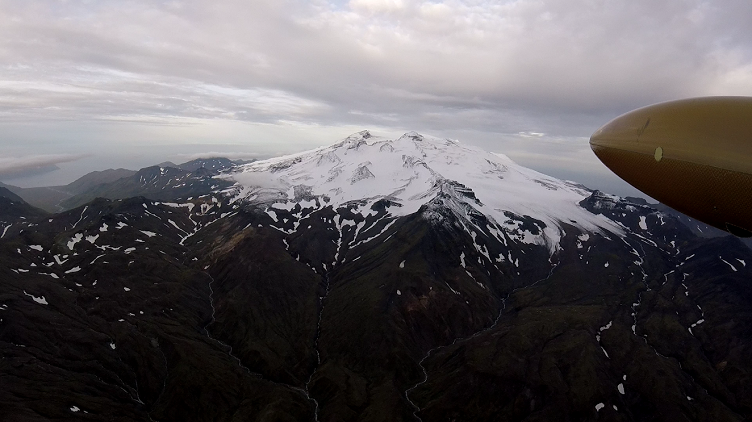 Black Switch Technologies’ S2 drone took flight for the first time over the Makushin volcano in Alaska in September to collect gases and monitor for eruptions. Source: NASA

In the fall of 2021, drones were used to circle the summit of an active volcano for signs of an eruption that could be brewing. The volcano was Makushin in Alaska’s Aleutian Islands where a group of scientists and engineers demonstrated the UAS and how it could successfully fly without pilot’s eyes on the aircraft.

NASA said the project could lead to drones monitoring volcanoes and other hazards worldwide.

Previously, monitoring of volcanoes was done either on foot or by piloted aircraft. But this can be dangerous and costly. Also, it can’t be done realistically considering how many volcanoes are active worldwide.

UAS can fly beyond the visual line of sight (BVLOS), where the drone flies beyond the vision of the operator. This capability will allow drones to fly further and longer, reaching these dangerous areas without endangering humans.

NASA started experimenting with drones and volcanoes in 2013 and later signed a long-term collaboration with Black Switch Technologies to build the S2 UAS, which first went into operation last September in Alaska.

“We needed it to be really rugged, to withstand flying in the turbulent conditions and corrosive gases around volcanoes,” said Florian Schwandner, director of the Earth Sciences division at Ames and an early member of the project. “We also developed a gas-sensing payload the UAS could carry to look for signs of volcanic unrest.”

The U.S Geological Survey also joined the collaboration to allow these drones to carry a payload to detect additional gases and collect visual and thermal images.

During the deployment to Makushin, NASA flew four BVLOS missions to the volcano about 15 miles away. The S2 used autonomous systems and a programmable flight plan to reach the summit of the volcano, where it could only be captured on high-resolution visible-light and thermal images.

Scientists confirmed they could use these to detect differences in physical features that indicate volcanic activity changing underground. The flights also demonstrated the capacity of sensors aboard the aircraft to detect gases that may signal changes in activity in the volcano.

“Our goal is to continue to push the capabilities of UASs to provide valuable insight into natural phenomena,” said Jack Elston, CEO of Black Swift Technologies. “This deployment demonstrated some state-of-the-art automation technologies we think will help greatly simplify what are now very difficult UAS operations. One of the most exciting results was to see our custom autopilot system determine when conditions had become too dangerous and turn back.”

NASA said the project opens up the possibilities for more routine operations at volcanoes all over the world and these same drones could be used to track and respond to more hazards globally including droughts, floods, wildfires and more.