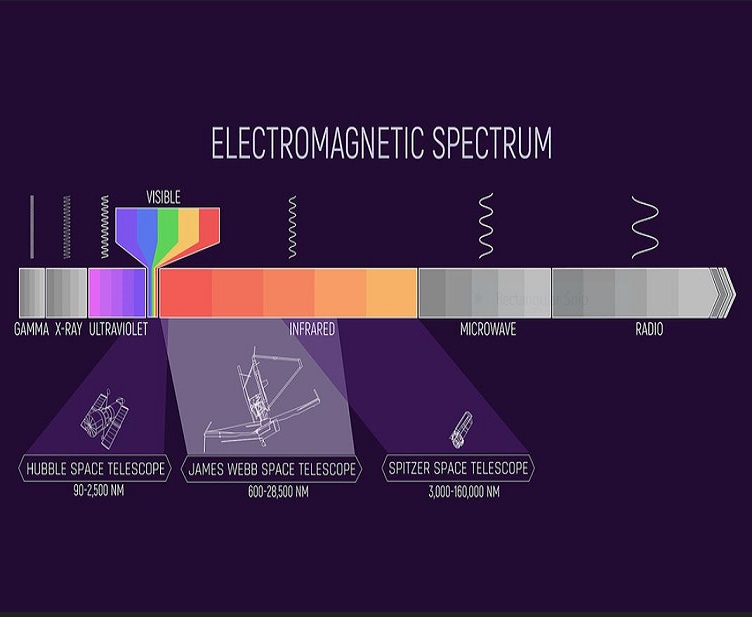 NASA’s James Webb Space Telescope is designed to observe infrared (IR) light — wavelengths of light that are beyond the rainbow visible to human eyes. The longer wavelengths of IR light provide information that other wavelengths cannot, including star formation and other processes that occur behind thick veils of dust and block the shorter wavelengths of visible light. Webb will detect a range of IR light that overlaps with those observed by other NASA missions, but will also cover a significant portion of the IR spectrum that they do not.

This infographic highlights Webb’s overlapping and complementary spectrum coverage with two other NASA missions: the Hubble Space Telescope and Spitzer Space Telescope. Webb features a combination of Hubble’s imaging power and sensitivity with Spitzer’s IR coverage, and goes beyond both to provide a wealth of new IR data on the universe that is hidden beyond visible red light. The craft tracks the 0.6 μm to 28.5 μm IR range.

The Spitzer Space Telescope is an IR space telescope launched in 2003 and retired in January 2020. Spitzer was the third spacecraft dedicated to IR astronomy, following IRAS (1983) and ISO (1995 to 1998). The system was equipped to monitor the 3.6 μm to 160 μm IR range.

The Hubble Space Telescope was launched into low Earth orbit in 1990 and remains in operation. Its instruments can observe a small portion of the IR spectrum from 0.8 μm to 2.5 μm but its primary capabilities are in the ultraviolet and visible parts of the spectrum from 0.1 μm to 0.8 μm.