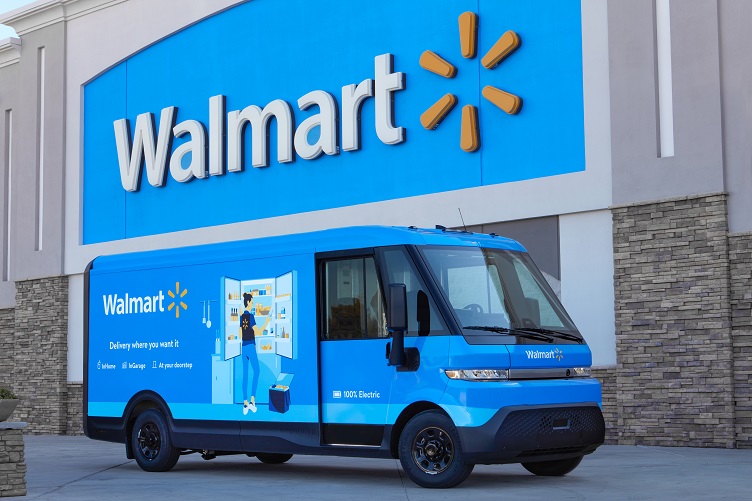 Walmart has reserved 5,000 BrightDrop EVs that will be used in its InHome delivery service and add to its electric fleet as it transitions to carbon neutral transportation by 2040. Source: GM

The agreement with Walmart will see BrightDrop reserve 5,000 EV600 and smaller EV410 electric delivery vans for the retail giant to use in its last mile delivery network. The move will also help Walmart achieve its goal to offer a zero-emissions logistics fleet by 2040.

The agreement with FedEx will see 2,000 electric delivery vans reserved for priority production over the next few years. The deal adds to FedEx’s initial reservation of 500 BrightDrop EVs, which was announced in 2021. FedEx said it is working on a plan to add up to 20,000 more vehicles in the years to follow and unveiled plans to expand testing of BrightDrop’s EP1 electrified container to 10 markets beginning this year.

BrightDrop is designed to help lower the costs, improve safety and increase productivity and security for businesses looking to deliver goods. BrightDrop will use the expansion of GM’s Ultium platform — the platform for GM’s line of electric vehicles (EVs) that are coming to market in the next five years — as well as its software and service opportunities.

“BrightDrop’s mission is to decarbonize the world’s deliveries,” said Travis Katz, president and CEO of Brightdrop. “We leverage the best of two worlds — the innovation, agility, and focus of a technology startup with the engineering and manufacturing might of General Motors. This combination, coupled with BrightDrop’s holistic solution set, gives us powerful advantages that uniquely position us to support the world’s largest delivery companies, like Walmart and FedEx, with their robust sustainability goals. Today’s commitments showcase our ability to power the electrification journey of some of the world’s biggest companies.”

Walmart said it will integrate the BrightDrop electric vans into its InHome delivery service, a platform for delivering food and other goods to households that will be available to 6 million homes in the U.S. by the end of the year.

To support InHome, Walmart will hire more than 3,000 drivers and equip them with an all-electric fleet of delivery vans. The BrightDrop vehicles potentially could hit the road with Walmart deliveries by 2023. It will also use the vans for secure and low-emissions deliveries for third-party retailers and brands via Walmart GoLocal.

FedEx is also working toward achieving carbon neutral operations globally by 2040 and has a target to electrify its entire parcel pickup and delivery fleet. To do this, it is adding hundreds of thousands of medium electric delivery vehicles over the next two decades.

FedEx has already been testing the BrightDrop EVs in a Toronto, Canada-based pilot. During the testing, FedEx saw a 25% increase in package delivery per day using an EP1 electric container. The pilot involved the integration of the EP1 into Express couriers that increase package deliveries by 15% per hour, removed one on-road vehicle from the delivery route and cut curbside dwell time in half.

FedEx plans to expand the testing of the EP1 starting some time in 2022.