The semiconductor market will reach historic highs this year with 17 chip vendors forecasted to hit sales of $10 billion, according to new data from IC Insights.

The list includes nine suppliers headquartered in the U.S., three in Europe, two in Taiwan and South Korea and one in Japan. Among these: 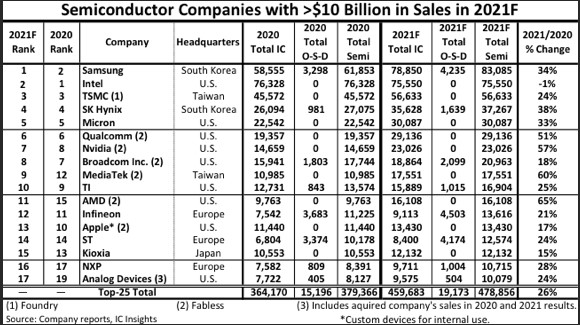 IC_InsightsAmong these so-called megasuppliers, sales are expected to jump by 26% in 2021 compared to last year, IC Insights said. However, growth rates are forecasted to range considerably depending on the suppliers. For example, AMD is expected to grow 65% this year while Intel is expected to drop -1% this year.

Four companies are forecast to post higher than 50% growth in sales including AMD, MediaTek, Nvidia and Qualcomm.

The full research can be found in the McClean Report.