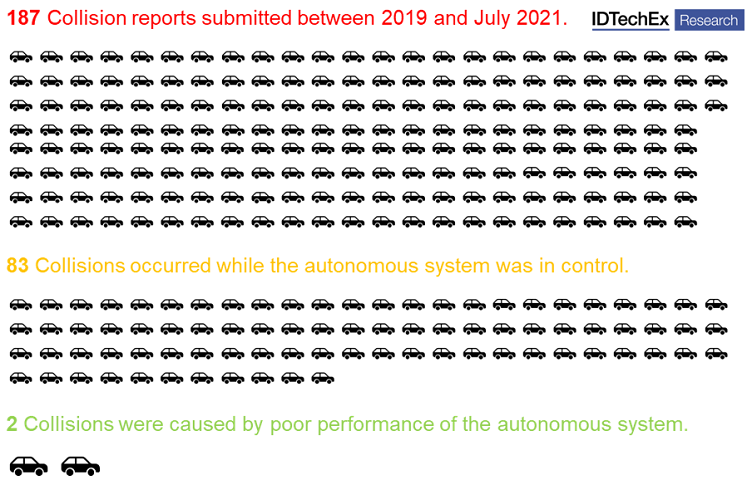 Analysis of the California DMV autonomous collision reports showing only two cases where the self-driving system was at fault. Source: IDTechEX

Autonomous vehicles are becoming more pervasive as the technology matures, however, consumers are still hesitant about the safety of these vehicles. But of the 187 accidents that self-driving cars have been involved in since 2019 in California, only two have been the fault of poor autonomous systems, according to new research from IDTechEx.

Every company testing self-driving vehicles in California must report any collision to the California DMV. IDTechEx examined data from the past two and a half years, finding that a staggering 99% of crashes involving autonomous vehicles were caused by human error.

Of these incidents, 83 crashes were recorded while a vehicle was operating in autonomous mode and only two incidents involved the vehicle’s system being faulty. The rest was caused by another vehicle or a misbehaving pedestrian.

IDTechEx looked at the California DMV website and found four cases that are of interest.

The first case involved Pony.ai in July of 2019 where a car reversed toward the autonomous vehicle driving into it.

The second case was with a Cruise automation vehicle operating in autonomous mode where it made a left turn at a four-way junction when a vehicle behind it attempted to overtake it and continue driving straight, but instead collided with the self-driving Cruise vehicle.

The third case was also with a Cruise vehicle operating in autonomous mode and making a right turn at a junction where another vehicle failed to stop at a stop sign, hitting the car.

The final case involved a Zoox vehicle driven by a human test driver in manual mode. The driver entered a junction at a green light and it was hit by another car illegally entering the junction while fleeing local police.

These cases demonstrate that predominanlty, human error was the result of autonomous vehicle crashes with most forms of collision being rear-end incidents while the vehicle is in traffic or stopped.

The two cases where the autonomous vehicle was at fault involved a Zoox vehicle. In both instances, the autonomous system appeared to misjudge its clearance to parked vehicles and made contact causing minor damage.

IDTechEX said it is likely the problem resided with a weakness or blind spot in the sensor suite.

Disengagement reports from Waymo, one of the leaders in robotaxis, suggest that often, the human driver had to react to a nearby human driver’s poor behavior. Similar incidents were recorded where actual collisions happened, and a few occurred when pedestrians attacked the autonomous vehicles.

The market research firm said that autonomous cars have advantages over human drivers due to their permanent 360° perception. Likewise, they can communicate with each other their intentions and they do not tend to make silly operation errors.

Because of this, as the technology improves, IDTechEX expects human drivers to eventually take a back seat to autonomous systems.