On September 14, 2021, the GMTO Corporation welcomed the Weizmann Institute of Science into its international consortium of distinguished universities and research institutions building the Giant Magellan Telescope. The new partnership reinforces that completing the largest and most powerful Gregorian optical-infrared telescope ever engineered is a top priority for the global scientific community. The unprecedented abilities of the Giant Magellan Telescope coupled with the Weizmann Institute of Science’s world-leading scientific expertise and resources in astrophysics will revolutionize the way humanity understands the universe and our place in it.

“The addition of the Weizmann Institute of Science is a giant win for our international consortium,” said Walter Massey, board chair of the GMTO Corporation and former director of the National Science Foundation. “We just became stronger and more capable. We are now one step closer to pointing the world’s largest mirrors toward the heavens and unlocking its many cosmic secrets.”

The Weizmann Institute of Science is a distinguished multidisciplinary research institution from Israel. Their Nella and Leon Benoziyo Center for Astrophysics promotes research in nearly all aspects of astronomy, expanding the Giant Magellan Telescope’s research capabilities by capitalizing on the Center’s outstanding team of astrophysicists and benefiting from renowned Israeli innovation. Before officially joining the GMTO Corporation, faculty at the Weizmann Institute of Science helped develop one of the first scientific instruments for the telescope, a spectrograph that is designed to study Earth-like planets around solar-type stars. Based on the institute’s leadership in astrophysics, particle physics and space mission design, the Weizmann Institute of Science, through its flagship initiative, aims to provide new levels of insight into the central questions of fundamental physics, while contributing to wide-ranging practical applications. The Giant Magellan Telescope is critical to the initiative. 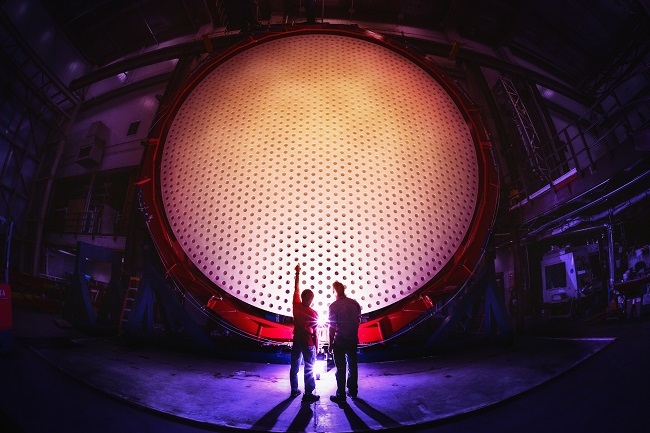 “Joining the GMTO consortium is a huge leap forward for the Weizmann Institute of Science,” said Professor Avishay Gal-Yam, head of the Deloro Center for Space and Optics at the Weizmann Institute. “It is a privilege to join a global team on the forefront of astrophysics research, which will allow us to accelerate our own observatory capabilities, develop instruments that will elevate the way the world’s leading astrophysics teams explore the universe and share expertise with the top partners in the field of astrophysics.”

Construction of the next-generation telescope is well underway on Las Campanas Peak at the southern edge of Chile’s Atacama Desert, one of the best locations on Earth to explore the universe. It will use seven of the world’s largest mirrors and the most advanced adaptive optics technology to see billions of lightyears into the universe with ten times the resolution of the famed Hubble Space Telescope. This extraordinary image clarity will enable scientists around the globe to obtain new clues to the fundamental nature and evolution of the universe — including the search for life on distant exoplanets.