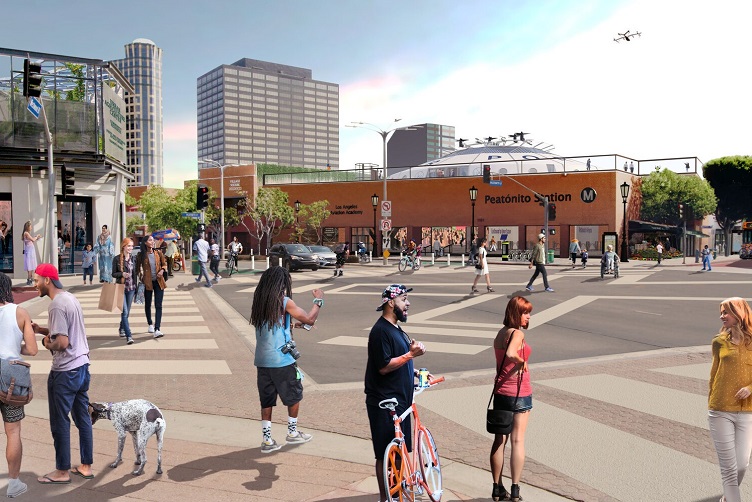 An artist rendering of how what an Urban-Air Port hub might look like in the future where it will be placed in cities or could be erected quickly in case of natural disasters. Source: Urban-Air Port

The goal is create autonomous drones and electric vertical take-off and landing (eVTOL) passenger vehicles to meet demand by providing the infrastructure for clean urban air mobility worldwide. The agreement would be a key part to Urban-Air Port’s plan to build 200 sites globally in the next five years.

According to data resource vendor TNMT, investment in urban air mobility this year has reached $4.7 billion including new investments from Joby Aviation, Archer Aviation, Lilium and Vertical Aerospace. In the next 20 years, this industry is expected to hit $1 trillion.

Urban-Air Port said this growth lacks the infrastructure to support these vehicles, making it a major block on the market and creating a significant barrier to urban air mobility in the near term.

Earlier this year, Urban-Air Port received support from the U.K. government to build a fully operational urban airport and charging hub for aircraft and drones. The port, named Air-One, will be unveiled early next year in Coventry, U.K.

The company is focused on deploying the technology needed for eVTOL aircraft and delivery drones and plans to plug the infrastructure gap with more than 200 electric air mobility hubs worldwide in the next five years to meet global demand.

The hubs will be able to support any flying car or drone vehicle, large or small, with maintenance and charging able to take place on-site. The hubs will be in dense urban areas and remote locations and can be easily moved to alternative sites, such as a rapid deployment in the case of a disaster or anywhere emergency services are needed.

Additionally, the hub will be integrated with all modes of sustainable transportation including electric vehicles, buses and scooters as well as cargo that can be loaded and unloaded with seamlessly onward transport.

Hyundai’s part in the infrastructure will include developing 65 sites in locations across the U.S., U.K., EU and Asia Pacific with the goal of unlocking key areas by 2030. Hyundai is developing its own eVTOL vehicle in tandem with supporting the ecosystem with plans to have the aircraft available in 2028.

A prototype of the flying air taxi was shown two years ago at CES 2020 with Uber, however, Uber has long since exited the market for flying cars.