New Yorker Electronics has released two new Electrocube high temperature film capacitors for use in very high temperature applications. Both the Electrocube 433D and 463D foil capacitor series are manufactured using polytetrafluoroethylene (PTFE or Teflon) for maximum protection against extreme heat. The 433D series is Teflon and foil while the 463D series is metallized Teflon.

The Electrocube 433D and 463 are designed and optimized for high temperature applications subject to AC and pulsing signals. They are rugged, non-inductively wound film and foil capacitors with high temperature outer wrap and an epoxy endfill, which meets or exceeds flammability requirements of UL94V0. The capacitors offer high frequency operation, high current and stability in miniature package able to handle 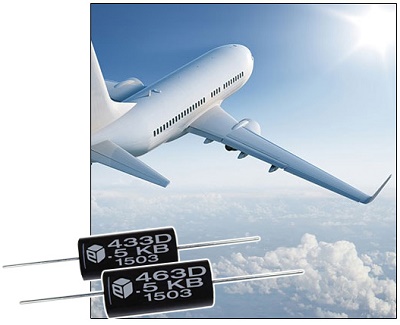 Source: New Yorker Electronicshigh surge currents without degrading. The 433D series is coveted for its high-grade materials, design and manufacturing for use in any extremely high temperature applications such as avionics, wind generation, high power applications, underground exploration and turbines.

They may be used for frequencies up to 100 kHz and have a temperature range of -55° C to 150° C without derating. These Electrocube film capacitors are proven to withstand 150% of DC rated voltage (for a period not exceeding one minute at temperatures of 25° C) and possess a current limited to 5 mA. They will withstand 140% of the DC-rated voltage at 150° C for 250 hours with not more than one failure in 12 permitted. The dissipation factor will not exceed .1% at 25° C and the dielectric absorption will not exceed 0.02% at 25° C per MIL-C-19978.