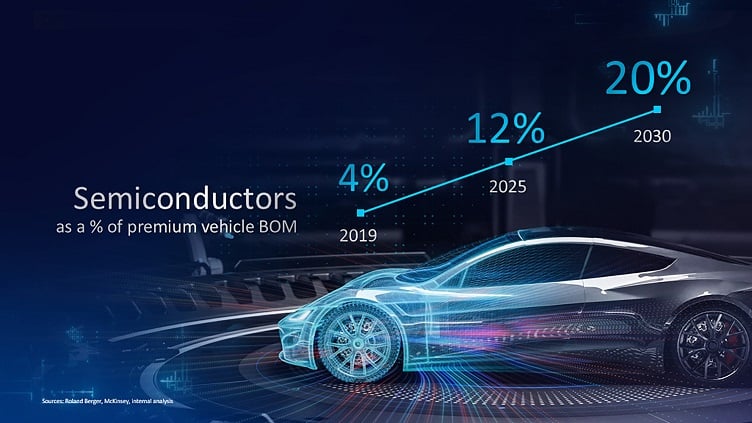 Intel sees chips being a major cost for cars moving forward as digitalization continues in the market. Source: Intel

Semiconductors are forecasted to account for more than 20% of the total premium vehicle bill of materials (BOM) by 2030, according to new research from Intel Corp.

This represents a five times growth rate over 2019’s 4% figure and comes from increasing demand for semiconductors. In fact, the growth of semiconductors is forecast to increase 5% globally over the next decade due to increased content and digitalization in markets such as automotive, cloud-to-edge infrastructure, industrial, artificial intelligence and the internet of things.

In a recent speech, Pat Gelsinger, CEO of Intel, predicated the total addressable market (TAM) for automotive chips will nearly double by the end of the decade to $115 billion, accounting for more than 11% of the entire silicon TAM.

This is part of the reason that Intel is increasing its efforts to build new semiconductor fabs in the next few years. Motivation also includes increasing domestic U.S. semiconductor manufacturing to decrease the reliance on Asian suppliers from a risk of future pandemics or geopolitical issues. Demand for chips shows no sign of slowing.

To meet this demand, Intel plans to invest $20 billion in two new fabs at its Ocotillo campus and to build at least two new factories in Europe. The company is also planning for future investments that could reach $100 billion over the next decade.

However, this is changing quickly to migrate to more advanced process technologies and Intel is partnering with automotive players to drive the transition globally in the coming years.

The company plans to establish a foundry capacity at its fab in Ireland and launch the Intel Foundry Services Accelerator to help automotive chip designers transition to advanced nodes.