Report: Chip shortage causes GM to halt production at nearly all US plants 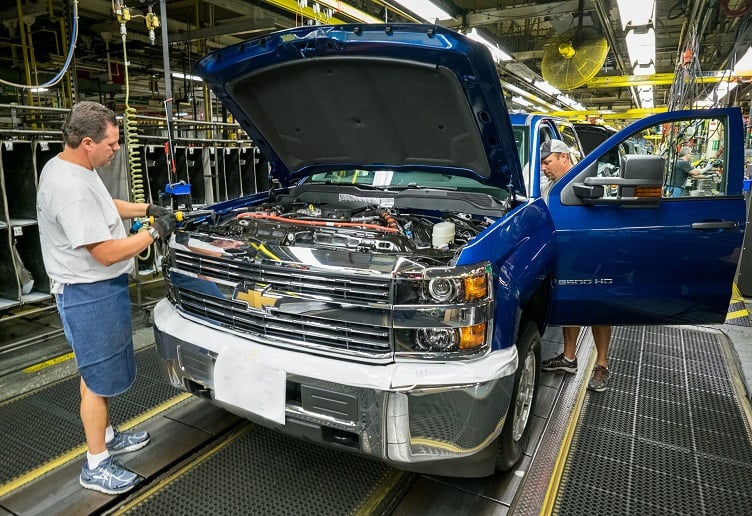 A GM worker assembles a truck at its facility in Flint, Michigan. Nearly all of GM’s plants will be closed due to the ongoing chip shortage in the supply chain. Source: GM

In what may be the largest impact seen in the automotive industry due to the ongoing semiconductor shortage, General Motors (GM) plans to temporarily idle nearly all its assembly plants in North America starting next week.

In a report from the Detroit Free Press, GM will keep online a handful of assembly plants located in Arlington, Texas; Bowling Green, Kentucky; and Flint and Lansing, Michigan. However, all other assembly plants in North America will be idle starting on Monday.

"All the announcements we made today are related to the chips shortage, the only plant down that's not related to that, is Orion Assembly," said GM spokesman Dan Flores told the Detroit Free Press.

Demand for semiconductors is at an all time high due to their increased inclusion in markets such as automotive, communications, internet of things and consumer electronics. The Semiconductor Industry Association forecasts that demand for chips will continue to grow by 5% over the next decade as these markets continue to grow in electronics content.

The chip shortage that is affecting the supply chain is a direct result of the COVID-19 pandemic. When the virus ramped up last year, lockdowns caused chip makers to reduce capacity initially. Unsure about the impact on market demand, some industries tabled their demand for chips causing, chipmakers to turn to other industries that wanted capacity.

When these industries saw demand returning, capacity was unavailable for the supply they needed, causing a shortage in the market. This was especially hard hitting to the automotive industry with numerous automotive OEMs updating earnings to reflect billions of dollars in losses due to the inability to produce enough vehicles.

In the summer, several automakers warned about delays in production due to the chip shortage including:

German automakers Volkswagen and Daimler were slowing production in Germany.

Tesla would delay the Cybertruck until 2022 and was turning to alternative chips for its electric vehicles.

Truck and trailer OEMs as well as telematics providers were expecting problems to persist through 2022 due to the chip shortage.

Ford said it will stop making pickups at its Kansas City assembly plant for the next two weeks and will cut shifts at two more truck plants in Michigan and Kentucky.

While most of these temporary plant closures affected vehicle production, they pale compared to GM’s move to halt nearly all its assembly plant operations. This may be a sign that the shortage has reached a point where more drastic measures are being taken.

The semiconductor shortage has led many U.S. companies, government entities and trade organizations to renew calls for an increase in domestic U.S. chip manufacturing to avoid the pitfalls of having the majority of manufacturing in Asia or if continuing geopolitical tensions cause future issues.

The Senate recently passed the United States Innovation and Competition Act (formerly called the Endless Frontier Act) tp shore up leadership in the semiconductor industry. The act would strengthen domestic chip manufacturing, packaging and research and development by investing $52 billion to implement the CHIPS for America Act, a bipartisan law designed to restore chipmaking on American soil.

U.S. Sen. Mark R. Warner, co-chair of the Senate Cybersecurity Caucus, issued a statement that the GM news speaks to the need for passing bipartisan legislation to fund new chip production in the U.S.

“While the impact of this funding will not solve the global semiconductor shortage overnight, the longer we wait, the worse this supply chain crunch will become,” Warner said. “I would urge my House colleagues to pass the legislation funding my bill as soon as possible.”