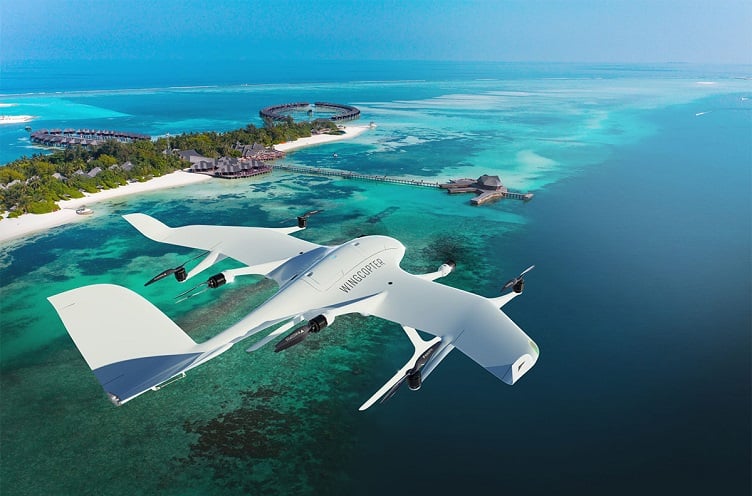 The Wingcopter 198 could carry two medium-sized packages or one large packages to locations globally. Source: Wingcopter

Called the Wingcopter 198, the drone can take off and land anywhere without any need for additional infrastructure and transitions into quiet and enduring forward flight. The aircraft can carry payloads of 13 lb on one battery charge and travel more than 47 miles or 68 miles with less payload, even in challenging weather conditions, the company said.

"The Wingcopter 198 is a game-changer for drone-based deliveries, ready to create logistical highways in the sky,” said Tom Plümmer, CEO of Wingcopter. “It can be perfectly utilized as a fleet solution in delivery networks to create new opportunities, everywhere.”

The drone is targeted for middle or last-mile deliveries, especially in rural areas or hard-to-reach places such as islands, mountainous areas or offshore platforms and ships. The aircraft’s top speed is 93 mph and features a triple-drop mechanism for separate and precise winch-delivery of up to three packages to multiple destinations per flight.

The Wingcopter 198 could also deliver two medium-sized packages or one large package to provide flexibility in what is delivered. The entire process is automatic with one operator able to control a fleet of up to 10 Wingcopter 198s simultaneously anywhere in the world via control software. The drone is also equipped with advanced maintenance technology to avoid unplanned downtimes, improve reliability and maintenance costs.

The drone architecture includes eight motors, an airspeed sensor, a flight controller and a main communication link to the operators is LTE/5G, backed up by satellite. Software developed for the Wingcopter 198 includes detect-and-avoid technology combining ADS-B, remote ID and visual artificial intelligence (AI) interpreting the flight environment in real-time and automatically initiates evasive maneuvers as required. Cameras use AI-based optical sensing for accurate and safe parcel dropping as well as precision landing in combination with obstacle avoidance.

The drone will be capable of carrying anything from medical supplies to consumer goods, spare parts and tools as well as groceries or freshly prepared food.