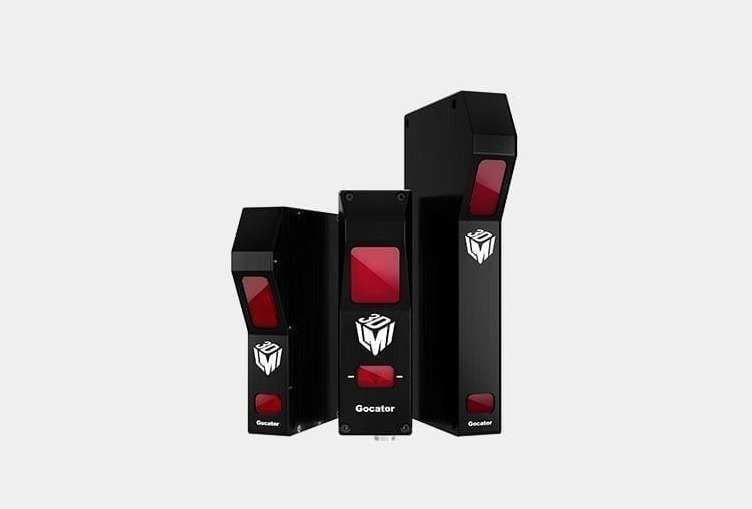 Physical quantities have always shaped (and reshaped) many industrial applications. Whether length, mass, time, electric current or temperature, companies use different fundamental quantities to derive various operational outputs that are aligned with specific goals. In their search for solutions, unique sensor applications have been ticking the boxes of time, fidelity, quantity, environment, quality and cost to help stakeholders close the gap between operational reliability and practicality.

Displacement is one derived quantity that plays an important role in some industries and advances in material science and engineering have been unveiling pleasant surprises. This is partly due to discoveries in the internet of things (IoT), surge in industrial robots, sensor miniaturization, growing interest in Hall-effect technology and multi-sensor integration. Other contributors include advanced core sensing elements, novel signal processing methods, power consumption reduction, compact sensor footprint, or implementing other ideas that don't compromise sensing physics. 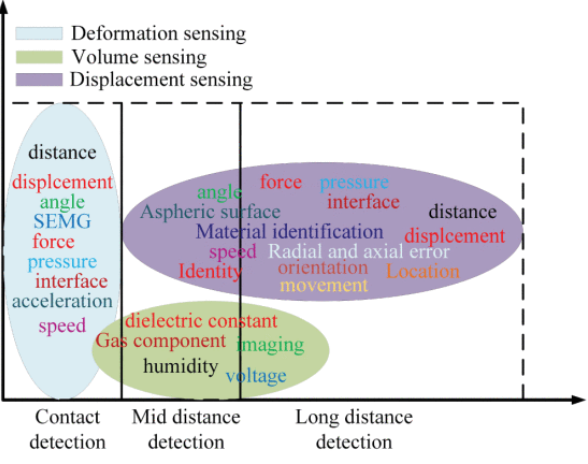 The basics of displacement sensors

In basic terms, displacement sensors measure the position change of an object. This can be done in various forms, including, but not limited to, measuring warpage, strain, pressure, velocity, thickness, controlling alignment, checking difference in levels to assessing swing amplitude. In all applications, the aim is to answer the question: what is the difference in movement when a fundamental or derived quantity changes?

To answer the question, different displacement sensor types have emerged as either contact or non-contact solutions:

Depending on the type, the output signals can be either analog or digital. The conversion principles from input to output are also varied, being inductive, electrostatic and electromagnetic.

Eddy current sensors use an alternating magnetic field that induces current in a conductive target called eddy current, which is based on Faraday's induction law. A change in the sensory coil's impedance due to the target object's movement is proportional to the change in the distance between the object and the sensory coil. By using the magnetic field changes, displacement can be determined from other variables and used in different industrial applications. Eddy current displacement sensors are robust non-contact devices that can be used in clean and dirty environments. 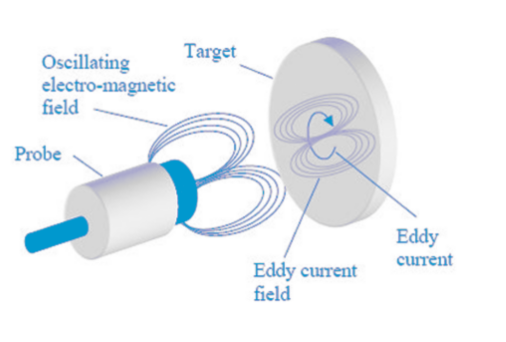 Laser displacement sensors apply the triangulation principle using the emitted laser, reflected laser light and laser enclosure to form a triangle. Displacement is known by considering the changes in the reflected light due to an object changing position. 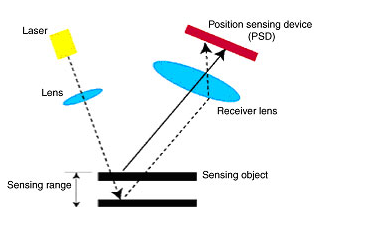 A linear variable differential transformer (LVDT) is an electromechanical sensor that measures linear displacement. It is important in structural health monitoring (SHM), measuring the displacement in one direction of a point in relation to another point. By tracking how one points moves in relation to another, engineers can narrow down the list of uncertainties about structural movements. 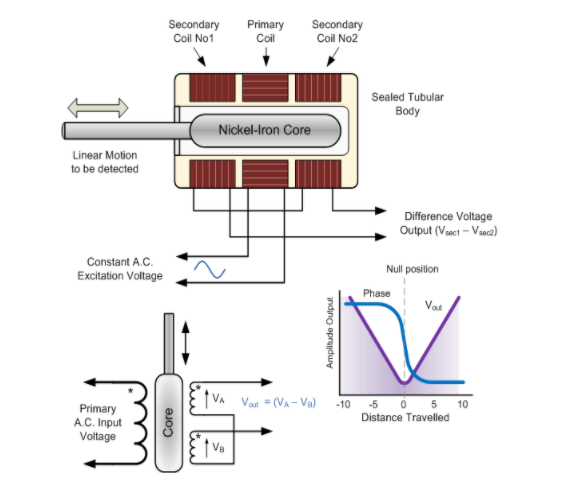 The two main components of a LVDT include a mobile armature and outer transformer windings consisting of a central primary coil and two secondary windings connected in series-opposing configurations. The sensor measures displacements by associating signal value with any position of the core. As a variable-reluctance device, the magnetic flux created in the primary and secondary windings will have different voltage amplitude and phase associated with the direction and motion of the core.

Parts manufacturing: Both capacitive and laser displacement sensors are used to control thickness, length, radius and positioning. These features are leveraged in industries where specific multilayered materials are combined, such as in semiconductor wafers, solar cells, sheet metals and laminated glass. By controlling the geometric features of each layer, material inconsistencies are avoided. These inconsistencies can lead to defective parts, extra material stresses and aesthetic concerns.

Condition monitoring: Condition monitoring of equipment is crucial to business operations. Industries use capacitive and eddy current displacement sensors to identify machine wear and tear by either considering displacement directly or using some other variable that can be translated into displacement. For example, temperature change in a machine can be correlated with displacement to indicate how temperature gradients affect the material of the machine. Another example would be correlating pressure changes to displacement to understand better how the machine behaves as the pressure fluctuates. The devices can be applied to both rotary and linear machinery movement to identify parts where fatigue and wear and tear could be an issue.

Structural health monitoring: Live loads and temperature variations can cause structural displacements. Additionally, fatigue due to cyclic loads weakens the microstructure of material, increasing the risk of failure. While all structures experience some form of displacement, excessive displacement will eventually compromise structural integrity. The aim of SHM is to ensure that displacements, cracks, loading, and so on are kept within acceptable thresholds and to provide important information if this is not the case.

LVDTs are commonly used in SHM of bridges and buildings. The devices are able to measure displacement lower than 0.001 inches and are known for being rugged and not fragile in harsh environments. Eddy current sensors are used instead of LVDTs to monitoring cracks on an aircraft and other structural factors. Signs of fatigue and crack propagation are examples where both LVDT and eddy current sensors can be used. The information gathered from SHM can be fed into preventative maintenance plans that mitigate structural risks.

Major industries worldwide are contributing to the surge in sensors being integrated into different business operations. By 2025, the industrial sensor market is expected to reach an impressive USD 29.0 billion, representing a notable increase from USD 18.2 billion in 2020. Changes in industrial dynamics and technology will continue to unveil novel sensors and driver electronics with various appealing features.

Companies in industries where displacement sensors are an integral part of operations can now choose from a wide selection of devices with features that align with specific constraints. Knowing the type of sensing, target distance, material composition, application and environmental issues are key deciding points that determine whether one type of displacement sensor is suitable for a specific application. Industries that take advantage of continuous sensor design iterations or adopt tailored solutions will optimize operations, remain relevant and competitive.

Janeita Reid is a civil and wind energy engineer, living in Belgium and originally from Jamaica. She is involved in research about aerodynamic airfoil optimization with discrete adjoints. Through technical writing, she hopes to boost renewable energy deployment worldwide in a transparent, cost-effective, and innovative manner.